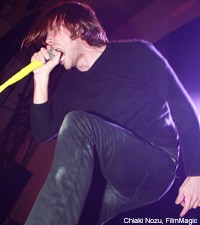 Leave it to Thursday to veer from the norm and the expected. For the re-release of this year's 'Common Existence,' the band chose to do a digital-only deluxe edition instead of the standard, ho-hum, yawn-inducing re-issue with extra tracks and artwork -- something that's essentially an expanded edition that forces the fan to purchase the same album twice.

"We wanted the deluxe edition to be digital so that everyone that already bought the record had the option to cherry-pick the songs that they were missing," vocalist Geoff Rickly told Noisecreep. "So often, deluxe editions are thinly veiled cash-grabs, and on this particular occasion, we wanted to avoid that. Next month, we'll be back to farting on snare drums and calling it art though!"

The digital-only release will include three new songs, a remix and a demo as well as the music video for the single 'Resuscitation of a Dead Man,' and a digital booklet. The digital-only version is available from Sept. 15 on.

The band will spend the fall on the road with Fall of Troy and will play their 2001 album, 'Full Collapse,' on the New York date of the tour, which occurs in late October. The New Jersey band chose to play 'Full Collapse' from stem to stern, because, according to Rickly, "it is such an important record, culturally, for so many of our fans that we thought it would be a lot of fun to end a tour with a performance of the entire record. When I say 'culturally,' I guess I mean it was a real entrance point for them into our music and, for many of them, 'underground' or 'counterculture' music in general." When he said "culturally," he meant it with an asterisk!

New York is the perfect place for the band to perform the album in its entirety, since the band hails from the local region, but is steadfast about dubbing itself a New Jersey band -- not an NYC band! While Jersey is the butt of many a joke and often erroneously perceived as the sixth borough, Rickly was able to laugh a little about his state of origin, saying, "My favorite thing about being from New Jersey would be the huge population of middle-aged men who act, speak and dress like Tony Soprano in a misguided attempt to be tough. Or maybe that's my least favorite thing about New Jersey."