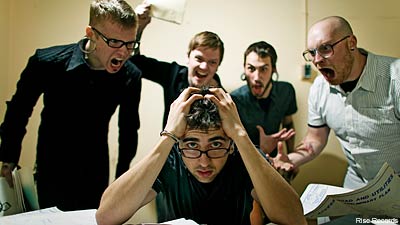 When asked how Those Who Lie Beneath are different from bands like Black Dahlia Murder and Job for a Cowboy, frontman Jamie Hanks told it to us straight, "It sounds cliché, but we want it more," Hanks explains. "I think we want it more. We want to do more with our music than a lot of these bands that are out now, seems like.

"We don't just want to do one style or one genre of music. We want to branch out and be the next big thing that's doing stuff that's prog-ish, but still remains really brutal. We all love Cannibal Corpse. But they've been doing the same s--- for years. We want to be Between the Buried and Me and Cannibal Corpse and the Black Dahlia Murder, all in one."

Lofty goal for a young band with one album out. That LP, called 'An Awakening,' is in stores now. Look for Those Who Lie Beneath to hit the road soon with Chelsea Grin, Within the Ruins and Monsters. But being the ultimate death metal band, one that's known to those outside of the genre, isn't the band's sole goal.

Download Those Who Lie Beneath Songs
Filed Under: Between the Buried and Me, BetweenTheBuriedAndMe, Black Dahlia Murder, BlackDahliaMurder, Cannibal Corpse, CannibalCorpse, chelsea grin, ChelseaGrin, Hatebreed, job for a cowboy, JobForACowboy, monsters, those who lie beneath, ThoseWhoLieBeneath, within the ruins, WithinTheRuins
Categories: Interviews, News
Comments
Leave A Comment
10 Metalcore Bands Who Don’t (Or Barely) Use Clean Vocals
The 100 Best Rock + Metal Albums of the 21st Century
Cannibal Corpse’s Paul Mazurkiewicz Says Corpsegrinder Is ‘A Better Vocalist’ Than Chris Barnes
Mall Goths Dressed Up as Kiss to Take Pictures With Santa
Cannibal Corpse’s Corpsegrinder Takes Photos With Santa, Donates More Stuffed Animals
10 Rock + Metal Bands That Only Write Songs About One Specific Thing
50 Most Controversial Hard Rock + Metal Album Covers [NSFW]
The 10 Best Album Sequels in Rock + Metal
Jamey Jasta Kicks Alleged Nazi Out of Hatebreed Show, Tells Fans to ‘Handle It In the Street’