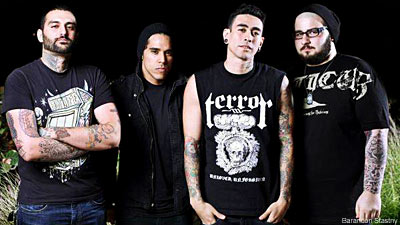 "We also got a new drummer," Randy Gonzalez of Thick as Blood said, as he pointed out the fact that fast-paced PR wires failed to mention. The guitarist explained to Noisecreep that the metal/hardcore outfit actually lost three members after their run with Emmure on the Mosh Lives II Tour last year. "They were tired of touring and wanted to settle down," was the reason for the mass departure of members.

Former Oceano guitarist Andrew Mikhail was just announced as the band's new guitarist. Mikhail announced back in February he was leaving the noted deathcore act, and in all ways possible the break up was a modern mess, cluttering comment boxes on the web. But it was soon after this that Thick as Blood's manager said they should give Mikhail a call to see if he would like to try out.

"We're really stoked on everything," Gonzalez gleamed on what they have already begun to work on with Mikhail. "He was just down here working on pre-production material." Gonzalez revealed that being able help continue the band's "drive forward" was what made Mikhail a perfect fit. "I had heard he wrote some of the music for Oceano -- I know he was one of the main ones who helped push the band forward so I definitely thought that would come into place with our band."

The drummer added to the Miami Beach based band is Peter Vazquez of Bishop. The band will be debuting the new lineup on their upcoming tour with Earth Crisis and First Blood.