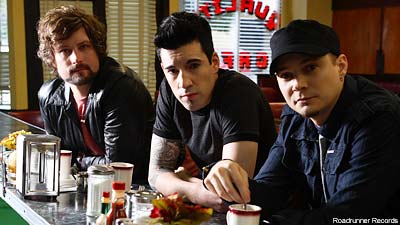 Canadian rockers Theory of a Deadman are currently on tour as part of Crüe Fest 2. The band is on the road, touring on the strength of their third album, 'Scars and Souvenirs.' The album has spawned a few hit singles, and 'Hate My Life' has especially taken off. Here at Noisecreep, we love any song that uses the word 'hobo,' so we we're pretty excited when Theory of a Deadman announced plans to release a live clip of the tune.

The new video, which premieres today exclusively on Noisecreep, shows the band interacting with fans during several performances of 'Hate My Life.' Watch as Theory of a Deadman perform the song all over America's heartland. You'll see rockers, kids and people totally unaware of being on camera. Most of all, you'll experience an awesome concert vibe that might actually make you want to go stand in the heat and catch a show ... and, er, totally not hate life. At least for a little while.

Theory of a Deadman Tour Dates
on TourTracker.com