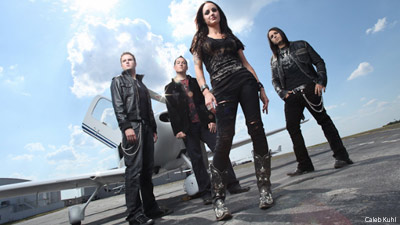 For a band to claim influence and inspiration from everyone from Sevendust and Metallica to Pantera, Megadeth and Alanis Morrissette might seem befuddling and eyebrow-raising for fans and listeners, but Tooth and Nail newbies, Pennsylvania's female-fronted the Letter Black, do just that. "We're a combination of these [sounds] mixed with our own twist, and that is how we came up with our style, which is more hard rock, especially our live show," vocalist Sarah Anthony told Noisecreep. You can check out the band in full performance mode in their video for 'Hanging by a Thread,' which is premiering here on Noisecreep.

While recording their debut album, 'Breaking the Silence,' the band -- whose name is a reference to the different chapters in our lives when we write letters of good and bad times, with the Letter Black being those letters which remind us of mistakes we have made and don't want to repeat -- ate at the same restaurant six days a week, for two months straight. Anthony says they didn't get sick of the eatery -- which was a Ruby Tuesdays-- due to the variety. "The grilled chicken wrap is amazing, and I get it every time," Anthony said.

It's a stark contrast to a Tulsa, Okla. show that the band booked, where no one showed up due to lack of promoter effort! Said slack promoter offered to take the band bowling and offered to allow the band to sleep on the floor of the venue, which was covered n bottles of urine, since no hotels were provided!


Anthony recounts, "When the promoter got there, he told us that he didn't promote the show because he had a bunch of other shows that month that he already invested his time and energy into. So we were obviously mad and in shock. When we got into the building, it was trashed. There were water bottles that were full of pee all over the floor. There were huge holes in the walls that were big enough for me to crawl through. The floor was covered in trash, and the restroom sinks looked like ash trays. The promoter said he didn't provide hotels -- despite signing a contract saying he would -- and that if we wanted to sleep on the floor of the venue, we could. Ewww. So we ended up paying for our own hotel. The kicker was that he promoter said that he would take us bowling to make up for everything. It was horrible!"