Fans of doom metal and goth rock should head over to iTunes or their local record store -- they still have some of those around, right? -- and pick up Second World, the latest album from The Foreshadowing. Founded in 2005, the Italian sextet craft a spellbinding blend of melancholic melodies and crushing musical atmospherics, resulting in a kind of cinematic experience that defies genre limitations.

Noisecreep spoke with The Foreshadowing vocalist Marco Benevento about the group's new Metal Blade album and their goth influences.

The first thing that struck me about Second World is how successfully you marry elements of classic doom metal with a more goth-rock kind of edge. Did bands like Sisters of Mercy and Fields of the Nephilim inform your songwriting at all?

I also think the music on the new album would sit nicely as a soundscape in a action and/or drama motion picture.

I agree with you, it's actually our intent to try and create a kind of "cinematic" effect in our music. We always liked to create some suggestive atmosphere recalling drama motion picture soundtracks, and in this regard I would also quote Angelo Badalamenti and Philip Glass as additional inspiration of our music.

The fact that Marco actually sings in a melodic kind of style over the usual death growls many bands we cover in your world is refreshing. You can also make the lyrics out very easily which is great as well. Did The Foreshadowing always set out to have clean vocals?

Yes. From our very beginning we always tried to think our lyrics with a melody inside, and moreover we found that our style should be distinguished from the other doom metal based acts one way or another, since we weren't inventing anything in terms of originality. In addition we were looking for a deep, profound and baritone voice in order to give more obscurity to our sound, and Marco has been the perfect strike in this respect. We always refused to add growl or scream parts into our songs, despite Marco used to growl in his previous band, How Like a Winter, then he's very good at growling and screaming,just to make clear it was a stylistic choice of our own.

The lyrics on Second World mesh perfectly with the arrangements and mood of the album, but is it ever a challenge to write in English? Do you first write the lyrics out in Italian and then translate them over?
It's certainly a challenge, but it was much more easier in this album than in our debut, Days of Nothing, since in the meantime we have all improved our english acknowledges. However, I've always try to start from english to write the lyrics, I can assure that if I first wrote the lyrics in italian and then translate into english it wouldn't work at all, since english is a language with a lot of monosyllabic words, therefore it's often much more easier to express a whole concept into a sentence than in italian, whereas words are much longer. 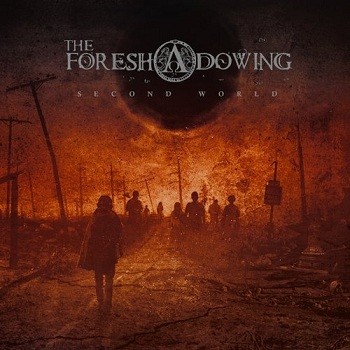 Now that the album is available in the States, do you have any plans to make it over?

Of course! We have now both Second World and Oionos, our previous album, available in the States, and it's a great opportunity for us of whom we want to take advantage. Both albums are available on Metal Blade and we're taking in high consideration the idea of making a tour in America. That's why we decided to contact Maurizio Iacono from Rock the Nation USA [also of Kataklysm]. He has listened and appreciated our music and decided to let us enter in his roster, and obviously it's a great honor for us to find ourselves in a giant like RTN USA, we definitely consider it a great result.

The Foreshadowing's Second World is out now via Metal Blade and available at this link.