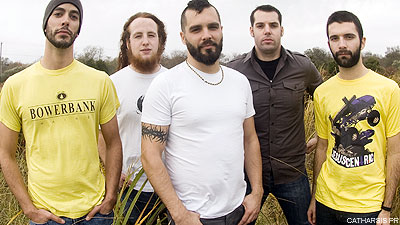 The Empire Shall Fall, the most recent project of former Killswitch Engage singer Jesse Leach, released a free MP3 cover of 'Arcasenal' from the long-defunct, genre-defining iconoclasts At the Drive-In, which opens 2000's groundbreaking 'Relationship of Command.'

In a statement, bassist Nick Sollecito said, "We had debated for months about a cover song that was appropriate for us on a whole. I suggested something by At the Drive-In to which Jake suggested 'Arcarsenal' and we all agreed immediately." But make no mistake. The members of the Empire Shall Fall understood the risks and rigors of covering a band as revered as ATDI when they endeavored to offer their rendition of one of ATDI's song. Sollecito said, "Taking on a song by a band as mighty as At the Drive-In is no small task, and we understand the dangers in doing so. But I think we all love the band so much that it was hard to say no."

A free download of 'Arcarsenal' can be found at www.anglesideside.com. The Empire Shall Fall's debut, 'Awaken,' is out now. You can also check out their video for 'Lords of War.'