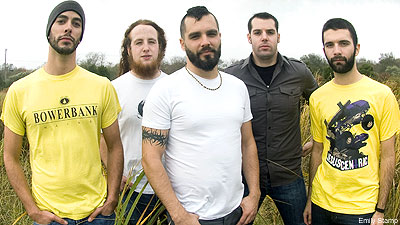 We've all seen the live bootleg of Jesse Leach rejoining his former bandmates in Killswitch Engage at a recent New York City show. Powerful? Yes, but so is Leach's new band, the Empire Shall Fall. If for some reason you haven't heard the band's relentless and versatile debut album, 'Awaken,' the video for 'Lords of War' will serve as a great teaser for the politically-charged band.

Produced by the band's close friend Kyle Regan, who shot their behind-the-scenes webisodes, and under the photography direction of Anthony Jarvis, 'Lords of War' was put to camera on a chilling cold Massachusetts day, which fits the desolate voice of the song. "War is a symptom, the balance of order and corruption," Leach screams as the band plays atop dead earth. Though political in nature, it should be noted the Empire Shall Fall bleed of the same positive urgency to uplift that Leach was known for in his Killswitch days.


Released last November on Angle Side Records, a label run by bassist Nick Soleccito, 'Awaken' has gained stellar reviews not only as a return to the heavy for Leach, but as a record showing of a barrage of influences that get blended nicely with a spitfire smile.