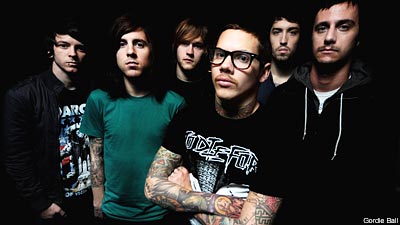 When Alternative Press magazine named the Devil Wears Prada 2009's band of the year, lead vocalist Mike Hranica felt like he'd arrived. "We wanted an Alt Press cover forever, since we started getting covers, we were like, 'We want Alt Press!' It was what we wanted most," Hranica gushed to Noisecreep. "It's an honor thing, and we've been really excited and a lot of the fans are really excited about it, too.

"They really enjoyed the article and just sent little notes on Twitter and messages on MySpace, being psyched and saying they better understand how we function and who we are. I don't like people thinking they know us and they don't, just going on observations and assumptions. It's cool to have something out there [that's] pretty accurate to who we are and really tells something instead of just being 'band of the year' in general."

While Hranica mentioned he doesn't want people to just "go on assumptions" of what he and his band members are like, the Devil Wears Prada weren't exactly the first band to embrace all the social networking opportunities available. Sure, the band has a website and a MySpace, but these days, it's all about Twitter, something Hranica says he initially hated for all the wrong reasons.

"I was aware of it, and I hated it because I hadn't tried it," the singer said. "On Twitter, I hate people who talk about themselves all the time. It's a really easy exercise in narcissism, and it's cool you can be on Twitter and not have to put up with that. Just being able to interact with fans and put out quick stuff like 'go check out this interview' or 'we're on at 8' is fun and cool. I know when I was 14 or 15 years old, I practically worshiped the bands I listened to. I would have loved to see [and know] things like 'they're at their practice space!'"

Now, like most bands, members of the Devil Wears Prada tweet away, sharing band info and messages with fans. But above all, Hranica says he is now embracing Twitter because he's "stingy and doesn't like getting annoyed by other people."

The Devil Wears Prada released 'With Roots Above and Branches Below' via Ferret Music in 2009. The band is on tour with Killswitch Engage and Dark Tranquility this winter.