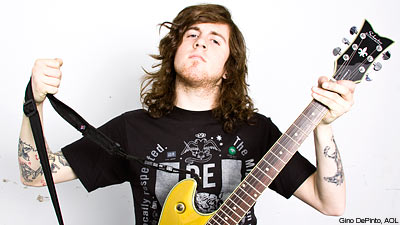 When Jeremy DePoyster was 10 years old, his parents gave him an acoustic guitar for his birthday. He'd asked for the guitar. He had made the conscious decision to pick one up and teach himself to play it. Sure, he could've asked his folks for a bass or a drumkit, but DePoyster, who shreds for Ohio metalcore outfit the Devil Wears Prada, fell in love with the sound of the instrument.

"I grew up around guitar because my dad always played and my grandpa played bluegrass guitar," DePoyster tells Noisecreep. "He had a Kalamazoo electric guitar," which was produced by Gibson during the 1960s and 1970s, "that had a [Fender] Strat neck and a [Gibson] SG body. Its this weird little electric guitar and he had an electric acoustic Gibson. I was just around it all the time, because my dad always played. I got that acoustic for my birthday and played that for a year. Then, my parents got me an electric."

DePoyster -- who, along with TDWP, is touring the U.S. with Killswitch Engage and Dark Tranquility -- strayed from the guitar for a spell, though. At the age of 15, he started becoming more interested in singing in bands, and tried out for the Devil Wears Prada. They needed a guitarist, and "I didn't think of myself at the time as a guitarist. I didn't know how to squeal, and do pitch harmonics and stuff. I never connected myself to that."

Once he'd resumed playing in TDWP, DePoyster, who even played trombone for his school's band and also knows how to tickle the ivories, says he fell in love all over again.

"The guitar ... it's just like a medium," he says. "I just have these sounds in my head, and then I get 'em out through the guitar. I'm not so much a technical [guitarist]. I play 100 percent by ear. I don't think riffs, I think chord progressions. If I hear a song, I can play it, but I can't tell you what the notes are."

On the band's latest release, 'With Roots Above and Branches Below,' DePoyster says he and guitarist Chris Rubey switched from drop D to drop B tuning, which gave the guitars a more menacing sound. "We wanted to do drop C, but every band that sounded like us was doing it at the time. On the new record, Chris and I started messing around in B, and we were like, 'This sounds awesome. This sounds heavy.' We started writing stuff in B, because we wanted to go heavier anyway. People like that we're a heavy band, and we just keep going heavier."

The guys all play Schecter Electric Guitars with EMG Pickups, and DePoyster's rig is rather complex.

"I'm running a Peavey 6505 amp into a Mesa Boogie guitar cab, and I have a Marshall JCM 800 I was in love with," he explains. "I have a weird pedal set up. I have Boss delays, but I can't bend down and change the timing and stuff. Most of the stuff I have is right on the click track, so I have this thing, called a POD X3 Live that I use for delays and choruses. I have that and I have an Ibanez Tube Screamer, and I have two noise gates ... one that's from my wireless to the pedals and one that goes into the effects loop with the amp. It's really complicated."