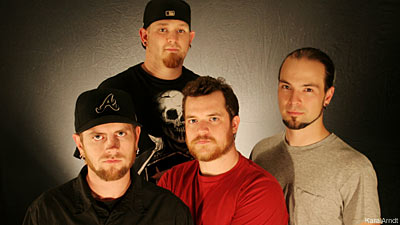 "It's more of a hassle than I thought it would be when I asked," Rob Elzey laughs, only slightly frustrated at this point. Elzey has been trying to get his band Telic some opening slots when Unearth makes tour stops near his and the band's home state of North Carolina. Elzey's day job is the drum tech for Unearh. "There are a lot of people that have to say that's OK," the drummer explained to Noisecreep. Things are definitely not like the old days, when all it took was a quick conversation to get added to a bill. Now booking agents, managers and local promoters are all involved in maybe giving a new band a shot.

Formed in the Christmas of 2007, the four -- rounded out by Nick Aust on bass, Josh Brooks on vocals and Britt Arndt -- got together just simply to jam. "The chemistry was there so we were like, 'We have to keep doing this,'" says Elzey. The first couple of shows the band played a few non-metal covers (Nirvana, Stone Temple Pilots), but just put their own heavy twist to them. "People knew the songs, but they just didn't know the presentation. They liked it but they were shocked and surprised."

Within two months the covers were gone and the band had a strong footing into their own sound, a technical metal that often gets compared to Unearh. Elzey sees that comparison pointing out that the groove element of the two bands has its similarities.

To record their self-released EP 'Arctic Wasteland' the guys in Telic spared wasted no time, and no money, to get the best they could behind the board; the band got Jamie King (Between the Buried and Me, He Is Legend). "It's always nice to stay local," Elzey remarked. "We got there and he was another mountain guy like us so we could relate."

Elzey was taken back by not only grand sound of the finished version of the songs, but of how the atmosphere of their time at Basement Recordings was captured. "I was impressed with the ease of the session," Elzey described the sessions relaxed vibe. "I've been in other recording sessions that were not fun. 'Oh you gotta do that again,'" he mimicked the stress yell he's heard before. "'Oh, you flubbed that. You gotta do that again.' It was a fun time, and I think that comes out on the EP."

The band got something unexpected with King, he became much more than a producer offering help and starting points for the new band. "We picked his brain a lot because we're trying to figure out the way the industry works. We would like to be signed and on tour," says Elzey. "He was very much an mentor on top of being a producer. I feel like I could e-mail with a question, and he would respond in a couple of days; he's a real busy dude."

Currently Telic are trying to get more shows going out of North Carolina and though opening for Unearth seems something far off right now the band is finding success with the connections guitarist Arndt has gotten through his productions/promotion company. "Sometimes venues take you seriously if you're not a band," Elzey commented. "You gotta try all the angles you can to get ahead of the game as much as you can."