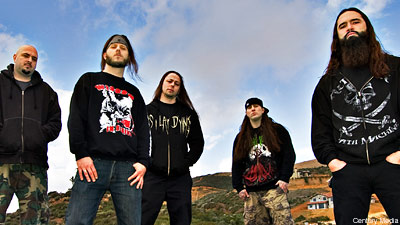 Longtime Sworn Enemy guitarist and lovable lug Lorenzo Antonucci has exited the Queens-based band after a decade of hardcore domination. The split was totally amicable and Antonucci looks back on the experience with lots of love and fond memories, having said in a statement, "This band has allowed me the opportunity to see the world and provided many countless, good memories that I will never forget. Sworn Enemy has been my baby since the beginning in 2000 and I've put everything that I had into it, giving it my all. It took me a long time to think this through, but after a grueling 75-day tour in the States, I just lost it and had had enough. I will always love the band and will always be a part of Sworn Enemy, as well as try to write as much as I can for the band if they continue on without me."

Not only has he started a new project dubbed Smashface, but he is trading his guitar for a microphone and will sing for the band. Smashface will record their debut album in Austria.

Austria? What's Antonucci doing in Austria? Turns out he is splitting time between his native New York and Europe!

"My reasons of going to Austria to record is because I just built a recording studio, Rockhard Studios, there and that was one of my dreams to have a studio," Antonucci told Noisecreep. "My other half lives there in the city of Salzburg, and there are no studios there to record metal. I just want to be able to help bands get great recordings and not get ripped off at the same time. I also have a home studio here in Queens that I can record bands at, too."

He is also stoked about transitioning from guitarist to frontman. "I love the fact that I'm going to be on vocals," Antonucci said. "Throughout my career, people have always told me to start a band and sing. I took their advice and started Smashface while on tour with Terror and Earth Crisis. I would just scream it everywhere like a maniac."

Ex-All Shall Perish member Chris Storey and guitarist Sean Swafford will play with Antonucci in Smashface.