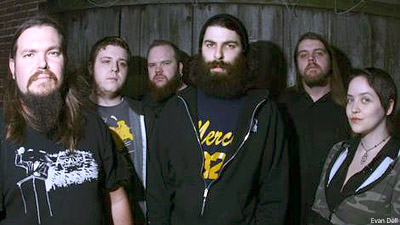 Want to know a few things about the oddly-monikered, Florida deathcore band Success Will Write Apocalypse Across the Sky? While it may be trite to interrogate a band about its name, this is the case where an exception is more than warranted! "It comes from a piece written by William Burroughs, entitled 'Apocalypse.' We know, it's not very popular reading, not that reading is popular at all these days," guitarist/vocalist Ian Sturgill told Noisecreep.

So a death-grind, neo-grind, nu death (or whatever hybrid that may be applicable) band advocates reading? It's not that shocking, since you have to be somewhat intelligent to create mathematically technical music like that which spills forth from 'The Grand Partition and the Abrogation of Idolatry," the band's Nuclear Blast debut.

The current, burgeoning neo-death scene doesn't really factor into SWWAATS's plans, though. "The scene is awesome, but it has little bearing on what we do," Sturgill also said. "We play this music because it's what we honestly feel. Yes, we're really that misanthropic. We keep things original by not paying any attention whatsoever to our peers and our new album reflects this. You'd be hard-pressed to compare this music to any of the current metal and death bands out there." Sturgill also issued a challenge –er, invite- to deathcore fans, saying, "Come and see it for yourselves. We'll be touring till our heads explode."

When they're not on the road and exploding, Sturgill contends that "we're all big f*cking nerds. We all dig geeky shit, like comics, bong rips or World of Warcraft. Don't hate! Everyone has their own Tamagotchi Gestures." Who can't relate to the need for creature comforts?

Download 'The Grand Partition and the Abrogation of Idolatry'
Filed Under: 822778, success will write apocalypse across the sky, SuccessWillWriteApocalypseAcrossTheSky
Categories: Interviews
Comments
Leave A Comment
Back To Top