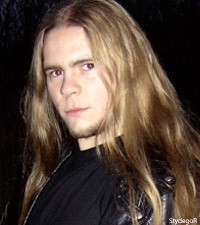 Over the past few years, metal has lost some true shredders. This week, we lost yet another. According to German Viking metallers StrydegoR's Web site, the band's guitarist, 20-year-old Slava Giebel, was killed in a fatal car wreck the night of May 23. Sadly, Giebel died less than two weeks before the release of the band's debut disc, 'Back On Ancient Traces.'

In a statement posted online in German, the surviving members of the band bid farewell to their fallen brother and faithful friend. "It is not easy for us to put our feelings into words," the statement reads. "The most important thing is that Slava never be forgotten...Thanks Slava for all of the wonderful times we had together at concerts, parties, rehearsals. Thanks for all the conversations we had...[and] thanks for all the sh-t that we've experienced together, and we still always have zueinander gehalten" (which, directly translated, means "held together").

The band says it will carry on, despite the sudden loss, and wished Giebel's "family much strength in this difficult situation" and promised they would "be there for them."

"We were more than friends, we [were] brothers," the statement continues. "For many years, we sang the same songs. Only the best die young - you were the best."

We here at Noisecreep would like to extend our deepest condolences to Giebel's family, friends, and the rest of his band.

Halestorm, 'I Get Off' -- Video Premiere

Filed Under: strydegor
Categories: News
Comments
Leave A Comment
Back To Top