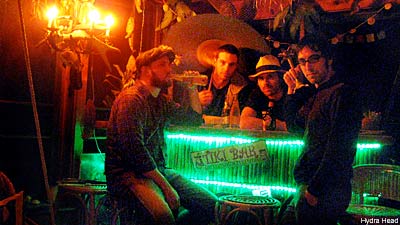 Back in April, Cave In announced their three-and-a-half-year hiatus was over. The news of playing again came along side word of a new vinyl-only EP entitled 'Planets of Old', which the band is also streaming online. Aside from two tracks that are on iTunes, the only places that will be carrying this coveted release are Hydra Head's online shop and the vinyl-only store Vacation in Los Angeles. But for those who aren't able to nab this release, fear not; 'Planets of Old' is just the beginning.

"We've been working on some music since recording the EP," Cave In singer/guitarist Stephen Brodsky told Noisecreep during a mid-afternoon phone conversation. "I think we all have a few things tucked away for the band to work on at some point. Not enough material for a full album yet, but I'm sure that will come in time."

Almost every song on the EP represents each members' style – or at least that's how Stephen sees it. 'Cayman Tongue,' which is arguably the band's heaviest song to date, is "definitely a Caleb Scofield number and rightfully so," according to Brodsky. "It's an audible snapshot of modern Caleb Scofield songwriting. That song in particular sounds like Zozobra covering an Alice in Chains song. We always say he's the guy that brings the heaviness to the band, so it was his civic duty to provide us with a heavy song for the EP."

The track is very fitting opener for the EP, as it was the first song the band began working on. "During our first practice we ran through a coupe of old songs just for the hell of it and kind of laughed at how rusty we were at them," Brodsky recalled. "Once we got that out of the way, we jumped into something brand new. That's always been a thing that made us all real excited about being in this band ... looking forward."

Looking forward is an apt theme when considering 'The Redtrail,' which has guitarist Adam McGrath doing harsh lead vocals. "It's one of the fastest songs we've ever written," Brodsky commented. "To me it sounds like Clouds covering a Death song. Adam is definitely a pretty big Death fan, especially of Chuck (Schuldiner)'s vocals, and I think he pulls it off real well."

Brodsky, who's always been noted as a man of hooks and psychedelia, has birthed the poppier numbers from the Syd Barret-painted houses in his brain. 'Air Escapes' is a sure hit of musical heroin, but he thinks the driving force for the track is the work of drummer J.R. Conners. "J.R. has been very schooled playing in the Doomriders in positive ways," Brodsky says. "Through those guys he's picked up the ability to play a pretty sick hardcore beat, and he doesn't shy away from playing anything fast. If anything we have to tell him to slow down on some of the older songs that we've been relearning, because our hands can't keep up with him. I thought a song like 'Air Escapes' would work with Cave In just based on that alone."

It seems the time off for everyone to work on their other bands has only strengthened Cave In, according to Brodsky. "I kind of feel like in the past, I was more apt to push some of my material into the picture to be worked on without filtering it best I could. Now it's very obvious that everyone's songwriting chops are pretty much to the point where we can just kick back and contribute pretty equally."

And as for touring, Brodsky doesn't think anyone should get their hopes up just yet. "No plans to tour anytime soon. I mean, we haven't been a functioning band for almost four years. So I feel like everything is sort of happening in baby steps," he added. "It's more likely that we will record before we tour, or even possibly play shows."