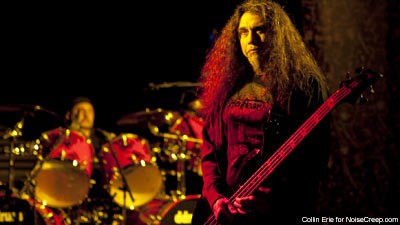 When Slayer stopped by our Los Angeles offices to film a live performance for our very own AOL Sessions, we weren't really sure what to expect. After all, the band had canceled a slew of live dates due to vocalist-bassist Tom Araya's health issues. Around the time of our taping, the thrash kingpin had recently undergone extensive back surgery, and anyone familiar with Slayer's frenetic brand of metal already knows how much physicality goes into every one of their live performances.

If any of the lucky few who were there to witness the band's Sessions appearance doubted if Araya and his bandmates were ready for the stage -- they were quickly schooled. Slayer took command of the day, playing songs that touched on every period of their discography with masterful precision. Though he couldn't headbang like he normally does, Araya sang songs like 'Mandatory Suicide' and 'World Painted Blood' with the fury and passion vocalists half his age don't even possess.


Clearly, Slayer arrived for our taping in fighting form, and all you have to do is watch the group's AOL Sessions appearance for proof of it.