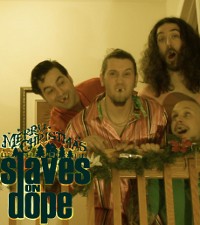 It's the holidays and also the time when retail stores pump the usual Christmas classics through the airwaves. But it's doubtful you'll hear Slaves on Dope's metalized version of 'All I Want for Christmas' playing at your local mall anytime soon.

"Kevin and I have always wanted to do a Christmas song. Years ago, a veteran disc jockey by the name of TooTall, had said it was a must for any band. It was a sure fire way to get airplay during the holidays, since program directors at stations are always looking for holiday content. We should have done it a long time ago, but I think , by evidence of the sheer ridiculousness of the song and video, it was well worth the wait," Slaves on Dope vocalist Jason Rockman tells Noisecreep about the Canadian band's new version of 'All I Want for Christmas.'

"'All I Want for Christmas' is a Yuletide classic from when I was a kid, so I am all about this track... it was the favorite in my house when I was growing up. I just about wore out my copy of the Chipmunks version! The video was shot in a day. We wrapped real presents, and Kevin and I bought our pajamas bottoms at Old Navy, which we returned the next day."

Slaves on Dope recently released the digital 'Careless Coma' EP, and will release 'Over the Influence,' their sixth album, on Feb. 28 via Sony/RED.

Filed Under: slaves on dope, SlavesOnDope
Categories: Interviews, News
Comments
Leave A Comment
Back To Top