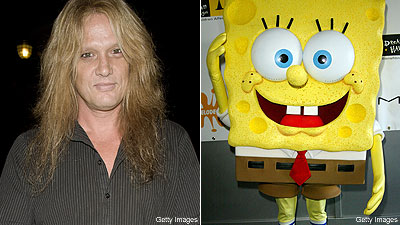 Sebastian Bach is getting animated. The former Skid Row frontman will appear on the July 5 'SpongeBob SquarePants' special, 'The Clash of Triton,' which airs at 8 PM ET. The half-hour show wraps up the kiddie network's Fourth of July holiday programming block.

In this marine life special, Bach will voice the titular character of Triton, the rebellious son of Queen Amphitrite (voiced by Victoria Beckham) and King Neptune (voiced by actor John O'Hurley). In the episode, the king is celebrating his 5,000th birthday at the Krusty Krab. SpongeBob and his cronies roll out the red carpet for the royal family, but the king misses his prodigal, erstwhile son, Triton. This leads SpongeBob to intervene as he sets out to find Triton.

Bas as a SpongeBob character? What's next, Janie Lane from Warrant lending his voice to the Smurfs movie? Whatever the case, this writer will be tuning in, given the fact that Bach's speaking voice bellows as loudly as his singing voice.

One needn't look any further than 'Metalocalypse' to see proof of the successful marriage between animated cartoons and heavy metal. Maybe this episode will somehow, some way, however subliminally, turn some 6-year-old watching it into a metalhead of the future.