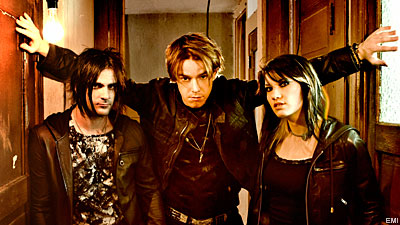 According to Puppies bassist Emma Anzai, Kroeger tried using a knife to open a bottle of beer on the night of a performance. When he broke the top of the bottle, Kroeger began playfully throwing multiple knives at the wall of the dressing room. Eventually, Kroeger played William Tell and had Sick Puppies lead singer Shimon Moore stand against the wall while knives were thrown at him.

"Luckily he is a pro," says Anzai. "He got the knife right next to Shimon's head." Anzai says that the incident ended up bringing the two bands closer together during the tour, which ended Nov. 21. "[Chad's] a talented dude," laughs Anzai. "It was definitely one way of bonding."