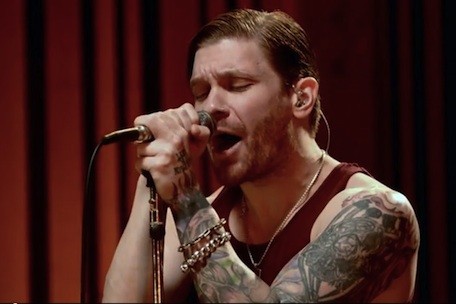 Although Shinedown can rock with the best of them, the new music video for their song 'I'll Follow You' shows off a more sensitive side to the band. The clip starts off with two lovers bonding in a dandelion field as they gaze longingly into each other's eyes. With Eric Bass on piano and Brent Smith singing intently to the camera, what's not to love about love?

Although the song is a power ballad, the lyrics of the track offer up a deeper look at romance, as evidenced by the following lines: "I'll follow you down / While we're passing through space / I don't care if we fall from grace." Although the video features the two unidentified lovers marrying, they are seen walking towards each other in a barren space surrounded by mountains. With various shots of waves crashing to the ocean, one would assume the pair are in for rough waters. But at least they will follow each other!

'I'll Follow You' recently topped out at No. 2 on the Active Rock chart, making it the fourth consecutive Top 5 single from Shinedown's 'Amaryllis' album. It follows 'Bully,' 'Unity' and 'Enemies' on the charts, with the title track from the disc now beginning to receive some play.

Shinedown will headline the fourth annual Carnival of Madness tour starting Aug. 13 in Cleveland. Joining them on the tour are Papa Roach, In This Moment, Skillet, and We as Human. Shinedown previously performed at the event's inaugural tour back in 2010, with Theory of a Deadman and Evanescence doing the headlining honors in the successive two years.