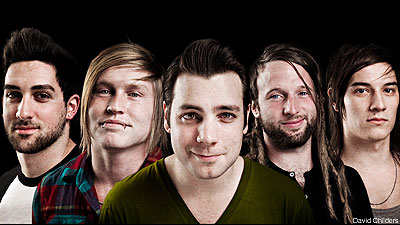 The video for Sent by Ravens' song 'New Fire' is simple but effective. It's a plot-free, all-performance clip of the band that makes use of space, which can confine as much as it frees. The clip, which Noisecreep is proud to exclusively premiere, features the band performing in a room with striped walls, with light coming in through panels. The players look the part of hard rockers; they're cute boys sporting plenty of dreads and tattoos and playing music not far removed from the melodic/metallic dynamics of Underoath.

"It was an awesome opportunity to work with Daniel Davison and to watch him bring out that darker, yet hopeful feel that goes along with our record," vocalist Zach Riner told Noisecreep.


The shoot attracted lots of the bands colleagues and supporters, too. Riner said, "We were so surprised at how many friends and fans came out to make this video rule! Some drove from Florida and South Carolina. It was an awesome process to be a part of, and if it only touches one person, then it's worth it to us." What a sweet sentiment.

'Our Graceful Words,' the album on which 'New Fire' is featured, is in stores now via Tooth and Nail.