Spiraling blast beats, fast finger technical guitars and noise tracks that made dogs run under the house were the make up of Pittsburgh, Pa's Creation is Crucifixion. Formed in 1997 the band was about more than just rocking the stage, they had a mission, they had a plan - they probably had blue prints of the way records and shows would go down.

The mission of Creation Is Crucifixion came from being the music part of the now defunct collective Carbon Defense League, which the goal of this collective formed by artists from Carnegie Mellon School of Art was to "create debate where it had previously been suppressed." Of course this mission sometimes over powered the music.

Guitarist Scott Mellinger played with the band up until their last full EP 'Automata' before leaving to join Zao. Many questions always surrounded Scott's entry into Zao as he went from a band known for songs like 'Burn the Churches' to the band noted as the pioneers of metal-core in the Christian scene.

Scott caught up with Noisecreep and spoke about late 90s hardcore days and how he made no kind of spiritual convergence to join Zao.

Creation Is Crucifixion is a hard band to get information on. What records and albums did you actually play on?

I played on mostly all the 7 inches that were released. Our first CD called 'In_Silico' I played on that. The record after that 'Automata' I wrote some of those songs but didn't play on that record, that was right when I left. The band prior to Creation, which was basically Creation, was called Chapter. A bunch of those songs went over to Creation.
There is a song on 'Automata' that I had nothing to do with that is one of the best fucking song on that record. I think it was 'Predator-Prey'. I loved doing that stuff. I was like seventeen. It was awesome.

Live Creation Is Crucifixion was unreal. So loud. So vicious. I saw no other bands at that time like that. Who influenced you guys to play that way?

The bands we were taking cues from were like Abnegation, who were a huge influence on everything we had done. A band like Abnegation in today's standards would be huge. Some of their riffs... MY GOD. I still listen to all the seven-inches from Abnegation.

The nice thing for us was when Chapter went to Creation, Abnegation split up, which was a bummer, but Paul then came into Creation. That was one of my favorite times because that was the dude I kind of looked up to a lot. And I was in a band with him... I got to write with him. It was just a lot of fun.

How would you describe Creation Is Crucifixion's sound?

I always heard that you left Creation due to being offended with singer Nathan's stances and speeches on stage. Was that why you left the band?

Actually no. I mean he had a lot of weird ideals and a lot of different opinions but I was never offended. Actually when I look at it now I actually agree with a lot of his points. I just left because the band was going in a weird direction; it wasn't focused on music so much as I wanted it to be. Yeah, I think the message is important but I started playing music to be music first and foremost and if the message is cool enough people will pay attention.

That band kind of took on a rule of the message being more important than the music. There wasn't much going on, we slugged a long for so long and no one was paying attention. That was the time, literately, when metal bands weren't accepted in hardcore yet. Punk/hardcore kids were not excited about metal, they wanted hardcore. I remember playing a fest one year and getting berated by what I think was because of a certain word Nathan used on the stage. People were just not accepting of that stuff so it was really hard and I was becoming closer friends with Dan and Russ (Zao) because they were from the same town. I knew them from high school. When I had the opportunity to go play with them I just decided to go do that.

I wasn't offended or against anything Nathan was saying but what I think his initial intent with all the stuff Creation was talking about was pretty awesome. He was going to Carnie Mellon and they were really computer based-he know a lot about computer-but at the same time I think humanity gets lost. And that was a lot of the stuff going on with The Carbon Defense League. The Carbon Defense League is essentially humanity defense.
I think the message was good but like any fridge ideology they are going to do things people would deem extreme.

That was the just the rumor I always heard.

That probably stems from the whole Christian/atheist thing. This the one thing that amazes me to this day that people didn't understand. I've never bought into the Christian ideal.

When I joined Zao they weren't buying into the ideal either, they were Christians in the sense they believed in what Jesus was talking about but they were rallying against organized religion as hard as any atheist I knew. When I joined the band it wasn't some Christian vs atheism thing...I mean I'm agnostic. 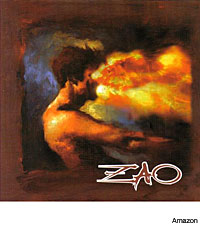 Creation was such an outwardly anti-religion band but that's the whole thing with Zao. People don't realize that if you listen to '(Where) Blood and Fire (Bring Rest),' 'Ravage Ritual' is about the church and how wrong and dead it is. It was different in those guys still had a Christian belief system but I wasn't offended by that either. A lot of people just thought once I joined the band, 'Oh, Scott's a Christian now,' but it's all so more complex than that.

But you know what sucks is that people do that. Life is such an amazing beautiful thing, so complex, why dumb it down and put it in laymen's terms of this God that has personal and human emotion like jealously. Come on man, life is too awesome to answer the questions of it in a simple way.

I think the saddest part is that there are a lot of people that feel this way but are afraid to talk about it. But I have no problem with it. I have never once come out and said I am an atheist and to get God out of everything because I don't know. I actually believe life in its essence is power so I can't say that power doesn't manifest itself in some way. I would hope that there is something more beautiful than what we have on earth.

I've read the bible myself. There is a lot I don't understand, a lot I don't know, but I have the basics down. I can argue the bible with Christians and some of them don't even know what the bible says but still they buy into it. To me I'm not going to buy into any ideology unless I research it a little bit. Some Christians just follow it blindly because of this fear of going to hell. You know what, if God does exist He's probably not too thrilled that you follow him because your scared.

Why do most Christians do what they do? Is it really because they feel this way or because they are scared it (hell)? People like that scare me. Look at Revelation, which is part of the bible, these people really do think the world is going to come to an end. I want to make the world the most amazing place I can because who knows if this is all we have. Those people can't wait for rapture and Jesus to come back. That scares the living shit out of me.