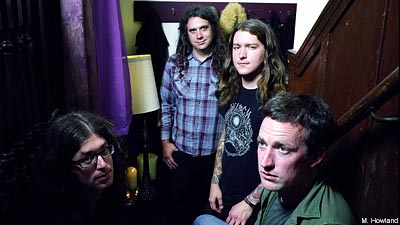 California stoner metallers Saviours have been getting a lot of attention lately from scene nerds who are touting the band as the next Mastodon. Why does drummer Scott Batiste think that is?

"I think just f---ing playing live and playing to as many people as possible, to as many different crowds as possible ... that's how you get the word out," he explains. "We went and did an Iced Earth tour, which was totally f---ing bizarre. We were very polarizing to that crowd. People either f---ing hated us or loved us. There was no whatever about it. So, we try to go out and play everywhere and we love playing live, and we understand that ... if you want to do this for reals ... you gotta go out and play. If you go out and f---ing kick ass for a couple of years, people are going to talk about you."

Batiste doesn't mince words. He gets straight to the point, and doesn't hold back. For instance, when asked why the band decided to self-produce their forthcoming album, which will be in stores in late October, he's honest. "I feel like that's a great tool for someone who doesn't have a vision of what they want the record to sound like," he says. "We very much have a vision of what we want the record to sound like. We knew what we needed to do to make it happen, and we did."

Saviours have created such a name for themselves that they've even attracted the attention of one of the 1990s most revered guitar gods ... Dinosaur Jr.'s J. Mascis. He likes Saviours so much that he asked the band to open for them when they play a free show in New York's Central Park on Aug. 16.

"We played shows with J.'s other band Witch a bunch, and we're friendly with them," says Batiste. "J. recognizes me when I see him, and we talk and s--t. But apparently it just came up, and they were like, 'Do you want to do this thing?' 'Uhm, yeah.' Its going to be huge. In Central Park. It's free. Its near where John Lennon was shot. It sounds f---ing rad."