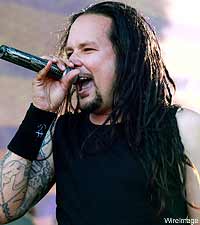 On Jan. 20, Warped Tour architect Kevin Lyman and his camp confirmed what was one of the worst kept secrets of the latter half of 2009: Korn will be headlining the 2010 Rockstar Mayhem Festival, which kicks off July 10 in San Bernardino, Calif. The tour makes stops in 26 cities before winding down in late August.

Of course, Korn have a new album on the way, and they will be joined on the 2010 Rockstar Mayhem Festival main stage by another artist with a record coming soon in Rob Zombie. The rest of the lineup is rounded out by a lot of other expected names. As has been heavily rumored, Lamb of God and Five Finger Death Punch will also be on the Mayhem bill.

The Mayhem Fest side stages will be a breeding ground in 2010 for brutality and will surely have the pits circling and kicking up dust all summer long. Hatebreed, Chimaira and Shadows Fall join Winds of Plague and an act to be named later (no one big, just the victors of the Jägermeister Battle of the Bands contest). And on the other side stage, Lyman's recruited Atreyu, Norma Jean, In This Moment and 3 Inches of Blood.

This third, very hardcore installment of the 2010 Rockstar Mayhem Festival is slightly more -- what's the word? -- mellow than the 2009 edition, which boasted Black Dahlia Murder, Behemoth, Slayer, Whitechapel, Killswitch Engage and Job for a Cowboy.