During his 25-year career in the music biz, he has rubbed elbows with some of the most influential and famous rock stars of all time, including Roger Daltry, Gene Simmons, Slash and Steven Tyler But David Fishof's most important legacy will be the Rock 'n' Roll Fantasy Camp. Founded in 1997, the camp has given thousands of civilians the chance to learn and then jam with rock royalty. Fishof and mega-producer Mark Burnett also adapted a series for VH1 Classic filmed at the camp.

One of the most renowned impresarios in music, Fishof's finally gathered many of his stories into a new book. But it's not just a biography and great rock 'n' roll read, it's also a blueprint on how to build your own successful career path the way he did, combining a love for music and a business strategy.

The book, Rock Your Business - What Your Company Can Learn From the Business of Rock and Roll, just hit stores this week, and Noisecreep can't recommend it enough. We decided to chat up Fishof and get some background on the book and career, but we got more than we bargained for.

Keep reading below for a hilarious story he shared with us that includes Eagles/James Gang legend Joe Walsh and late The Band drummer/vocalist Levon Helm. Oh yeah, we also got our hands on some video footage of the mentioned incident!

David, why write the book now? What is it about this point in your career that made the timing right?

Because I have come to a point in my life where i want to share this amazing information I've learned from being around rock stars and bands. Everyone has an idea. I get pitched all the time, TV series, apps -- everyone has an idea. But what do you do with it? I thought I'd learned enough in my life to help anyone take any dream and make it real and so the time seemed perfect for this book.

And beyond the amazing stories you tell about some of the biggest names in rock 'n' roll and metal, you lay out some very sound business advice, too.

I've watched for 15 years of producing the Rock 'n' Roll Fantasy Camp how the process has changed the lives of many executives that have been campers. At the camp, in addition to having their rock and roll dreams come true, they learn about passion, team building, generating ideas – they go back to work and then write me to say how the camp enhanced their business philosophy! Which was another reason I wanted to write the book. The power of music has such a strong influence and positive effect when it comes to running a business. I want people to know about that.

We know how the camp affects the campers. But what about the famous musical counselors? How does it affect them?

In a wonderful way. Sometimes I think the rockers enjoy camp more than the campers [laughs]. It reminds them of life before they got famous, of a simpler time, when you just made music for fun. It also reminds them of the power they have to teach and to coach, and it encourages them to share advice and thereby change lives for the better.

Your camp has become a part of pop culture.

Oh my goodness. The Simpsons, Ellen, SNL and so many other things that have been done in reaction to the camp. All of those things reaffirm why this book works, why these ideas are relevant.

How has the Rock 'n' Roll Fantasy Camp affected you, personally?

In a big way. And I really understood it all after Joe Walsh and Levon Helm played a gag on me. It changed my life. On the first Ringo All Starr Tour, the late Clarence Clemons runs up to me saying he's quitting the tour. I asked why and he told me the guys were all fighting. I go back to see what's happening and Joe and Levon have squared off in a fight. There's blood, Levon has a knife -- it was awful. And then they break up laughing. It was joke! No real blood. They had watched me getting too stressed out and they wanted to loosen me up. I never forgot that. I looked at life a little differently after that. It was better. Also, being around such major musical successes, you learn a lot. And I tried to capture all of that in the book as well – what it takes to make it big.

Who do you see as the primary audience for the book?

Everyone from college students to CEOs. The life lessons in here are applicable to just about everyone. So many lessons, so many stories -– if you love music and you have ideas of your own you want to pursue, I think you'll really enjoy this book. I took a lot of time to include many important things in here that are just fun to read about.

Okay – who would you like to run a camp that you have not had yet?

Mick and Keith. They did such an amazing job on The Simpsons, wouldn't that be something? Of course Clapton, Springsteen- there area few other people on my list, but first I'd have to say Mick and Keith. 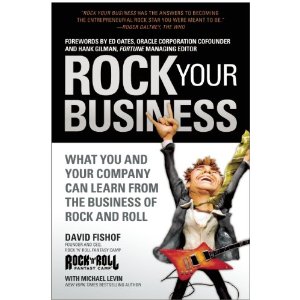 Pick up your copy of Rock Your Business: What You and Your Company Can Learn from the Business of Rock and Roll from Amazon today!