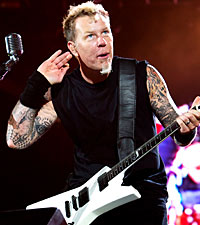 Metallica has been making headlines with their recent Lou Reed collaboration, but an artist from the other side of the musical spectrum has also decided that she could do with some of the San Francisco metal masters' heavy riffage. Rihanna has reportedly sampled Metallica's 'Wherever I May Roam' on her upcoming song 'Red Lipstick,' according to Metalinsider.

'Wherever I May Roam' appears on Metallica's self-titled album, colloquially known as 'The Black Album,' which in 2009 became the best-selling CD of the SoundScan era, surpassing Shania Twain's 'Come on Over,' Blabbermouth reports. 'Red Lipstick' will appear on the deluxe edition of Rihanna's upcoming album 'Talk That Talk' which will be released Nov. 21 along with the regular version.

'Red Lipstick' also samples Chase and Status' 'Saxon.' No audio for the track has become available, but if we know the Internet the way we think we do, it will probably be leaking soon.

Filed Under: Metallica, Rihanna
Categories: News
Comments
Leave A Comment
Back To Top