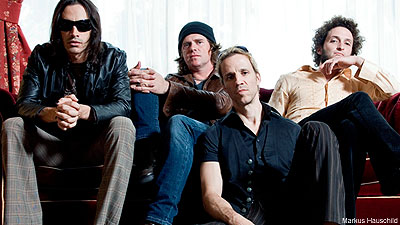 Extreme's Nuno Bettencourt is a renaissance man. He's a mega-shredder, is currently touring with pop star Rihanna and even writes, produces and directs music videos.

Today, Noisecreep premieres the video for 'King of the Ladies,' a fun, classic anthem perfect for summer. While Gary Cherone is known as Extreme's frontman, Bettencourt takes most of the lead on this one, telling a story of going back in time, trying to impress girls in his neighborhood. As you would expect, there's a big party, a barbecue -- and the cops arrive.

The song 'King of the Ladies' is from Extreme's newest studio album 'Saudades de Rock.' The band is gearing up for the release of 'Take Us Alive,' a live CD/DVD package. The DVD features four previously unreleased videos, including the clip for 'King of the Ladies.'

The live concert for 'Take Us Alive' was recorded in Boston in August of 2009. It will be released May 4 via Frontiers.