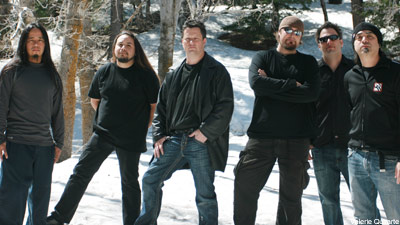 Singing for Redemption and Fates Warning means that vocalist Ray Alder has two jobs. But he's not exactly moonlighting! He juggles his jobs with relative ease and poise.

"When one band is on, one band is off," Alder told Noisecreep. "We're writing a Fates record now and I'm doing promo for Redemption, and it's difficult. [Fates Warning guitarist] Jim [Matheos] has OSI, and we get lost in our side projects, and it sometimes hurts for Fates Warning. Every two to three years, we do a record before people forget about us! But it should be a priority, and we used to do records every year and we now do it every four or five. My hair is getting grayer and it's not a timeless band."

Adler continued, "The [Rolling] Stones can do it forever; Fates can't. I don't want to be up there and feel silly. I don't want people to see me on stage and think, 'Ouch!' I will burn out before I fade away!"

Fates' fans may flock to Redemption because of Alder's association, but 'Snowfall on Judgment Day,' the band's third outing, has its own non-Fates merits that all prog and metal fans can appreciate. Alder said, "There are a lot of talented musicians out there that people can pick and choose from to listen to. But if they want some thinking man's music, they would be interested in this band, maybe? I say, if you gave us a try, you may like it a little bit. You wouldn't throw it in the trash [laughs]."

The reason Alder gives for the album's appeal is due to the band's experimentation. "We got it all together. We got it right on this record. We worked well together," Alder said.