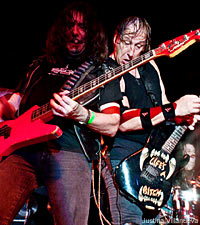 Numerous bands have found members through the Internet. New wave of British heavy metal veterans Raven actually found their producer that way. Or rather, their producer, Kevin 131 (aka Kevin Gutierrez) found them.

"I was on MySpace and Kevin sent me a message saying, 'I was a big fan from way back when. I've got a studio. You should check it out sometime,'" vocalist and bassist John Gallagher recalled to Noisecreep. "I was like, 'OK, since he's in Vienna, [Va.] and that's only 40 minutes away, I'll check it out.'"

Gallagher scheduled a time to drop by Kevin 131's Assembly Line Studios, then he and his wife took the drive to check out the facility. When they found the address, they thought they might be in the wrong place since the area was tree-lined and residential. "There was a regular house in a regular area, so my wife and I are looking at each other going, 'Hmm, this looks a bit iffy,'" said Gallagher. "So we go in, meet Kevin and go down to the basement. And it was amazing down there."

Kevin 131 (Aleixa, Project: Failing Flesh, Sorrow of Seven) had instruments and a full Pro Tools rig set up and played the Gallaghers material he had worked on, ranging from folk music to death metal. Then they sat for a while talking about music. "We really hit it off," Gallagher said. "You could just tell the guy really had his act together. And he's a musician as well. He's a drummer. He plays guitar. When you're tracking stuff, it's great to have someone who's not just a digit counter for punches and fixes. It made a huge difference."

In 2007, Raven met at Kevin 131's studio, tweaked and fine-tuned their best new songs and started demoing tracks for their new album, 'Walk Through Fire.' They had planned to go back and re-record the songs later, but they turned out so well the demos made it to the final record.

"The only thing that was difficult was matching some of the initial guitar tones with the ones we got later," Gallagher also said. "On the first four tracks we did, we used one of Kevin's cabinets, and when we went back later we brought some of Mark's [four by 12 cabinets], and those are amazing sounding. So we had to do some mixing and matching to get the sounds in the same ballpark. But Kevin had it down. He knew exactly what kind of guitar sound we wanted and really worked hard with me on the bass as well."

Raven spent six days recording the basic tracks, two days on guitar overdubs and another three days tracking vocals. Then in 2008, they returned to the studio to add extra background vocals, some keyboards and other sonic touches. "I'm actually playing violin on the intro," Gallagher said. "The more you listen to it, the more new things you hear, and that just gives the listener a little bit extra. I feel it's the best things we've done in God knows how long. We've done records that had good sound, we've done records that had good writing. But with this one, everything clicked."