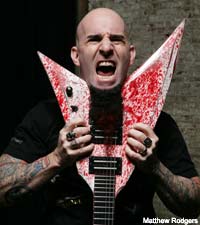 There's no denying the influence and intensity of Anthrax's 1987 album 'Among the Living,' which is why it has earned a place in the upper reaches of many fans and critics' top thrash album. Since the album has just been released as a double-disc set, and since Anthrax helped shape the face of the movement as one of the 'Big Four,' (alongside Metallica, Slayer and Megadeth), Noisecreep asked Anthrax guitarist Scott Ian to give us a list of his Top 10 thrash records of all time. And while some of his entries are obvious and irrefutable (Slayer's 'Reign in Blood,' Metallica's 'Kill 'Em All'), he also chose some discs that either influenced the development of the genre or stood alone as underappreciated documents of one of metal's most exciting eras. Here in no particular order are Ian's top ten thrash albums.

Slayer -- 'Reign in Blood' (Def Jam)
It just defines thrash metal. If anyone ever had a question of what thrash metal sounds like, just put on 'Reign in Blood.' The songs are amazing, the riffs are sick and it's heavy as hell from start to finish.

Suicidal Tendencies -- 'Suicidal Tendencies' (Epitaph)
I just think it's a perfect album. Every song on it is great. It's a perfect crossover between hardcore punk and metal, and I guess that's what makes thrash metal -- all those genre combined, and Suicidal were the first ones to do it because that record came out in '83.

Exodus -- 'Bonded by Blood' (Combat)
They kind of get overlooked. People talk about the 'Big Four' all the time, but back then it was really the 'Big Five' because Exodus were just as important and just as influential as everybody else. For me, when it comes to debut records, 'Bonded by Blood' might be better than all the rest of our debut records. They were so f---ing brutal.

Venom – 'Welcome to Hell' (Neat)
For me and all my friends, that was our first exposure to them. We were already familiar with Venom by the time 'Black Metal' came out, so 'Welcome to Hell' was certainly a huge eye-opener. It was one of those 'Holy s---' records. Like, 'Jesus Christ, listen to this. These guys are f---ing insane.'

Raven – 'Rock Until You Drop' (Neat)
Their whole vibe was incredible. The energy, the speed, their insanity was just completely over the top. No one was calling it thrash metal yet, but after that expression came around you were able to look back and say Raven definitely helped start this.

Anvil – 'Metal on Metal' (Attic)
They've gotten popular now, but for a long time, most people completely overlooked Anvil. 'March of the Crabs,' 'Jackhammer,' '666,' 'Mothra.' They were all so classic and definitely pre-dated what thrash would evolve into. Robb Reiner's drumming helped invent thrash metal. The guy was just so over the top and so insane. Back then, he was the guy that Charlie and Lars looked up to. Everyone looked up to him. He was the guy, he was the God.

Metallica – 'Kill 'Em All' (Megaforce)
Influenced by bands like Anvil, Raven and Motorhead, Metalllica definitely took it and turned it into the new wave of American thrash metal. That was certainly the forerunner of the whole thing. They broke the door wide open. They didn't get big off of 'Kill 'Em All,' but it was the album that definitely got the ball rolling.

Mercyful Fate – 'Mercyful Fate EP' (Rave-On)
We were listening to them so much back at that time, and I couldn't listen to that more than I was back then when it first came out. That EP was a huge influence on everything that was to come. The playing, riff wise, that thrash element is certainly there in the guitars.

Pantera – 'Vulgar Display of Power' (East West)
If that record had come out in 1986, it would have been right there with all of us. It's that great of a record. And that they were able to do that in 1992 and come out with something that sounded so original and fresh, yet had all the elements of what had come before it. That's what we did. That's what Metallica, Slayer and Megadeth did. Pantera were able to do that all those years later, and do it so f---ing well. That's one of the best metal records of all time, let alone thrash records.

Megadeth – 'Killing Is My Business ... and Business Is Good!' (Combat)
I remember Dave playing me the demos to that record. We were on tour with Raven and we were playing the Country Club in LA. We were sitting in someone's car and he was playing me the demos to 'Skull Beneath the Skin' and we were just like, 'Holy s---,' banging out heads and listening to this stuff. That record still absolutely holds up. There are some amazing riffs. And to be able to get kicked out of Metallica after having written a lot of 'Kill 'Em All,' and then come back with 'Killing is My Business' and be able to churn out all those great riffs and great songs is no small accomplishment.