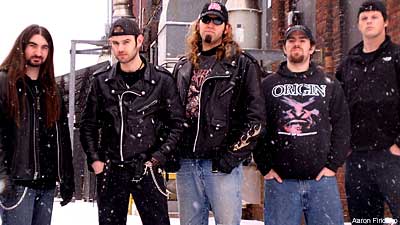 After several weeks on the road, the five members of Ravage have just announced a cancellation of their remaining tour dates. A myriad of problems have come up over time, which include poor promotion, unsupportive local bands and van issues, and they will be returning to the Boston area only a week shy from their tour's completion.

Ravage have always struggled with finances, and this tour cancellation occurred after a few single dates had already been slashed throughout the three-month run. The band released a statement, which was reported by the Metal Underground. "Those who screwed us over ... bands who dropped off gigs at the last second and didn't bother to even call the clubs, local 'support' bands who didn't even bother to stick around past their own set ... you also know who you are," says Al Ravage. "We won't forget either."

Ravage is a hybrid of classic metal fused with modern thrash, and the band has developed a cult following. Their self-released 2003 EP 'Curse Of Heaven' was what brought them worldwide recognition, but money struggles have always deprived them of the best production quality for their sound.