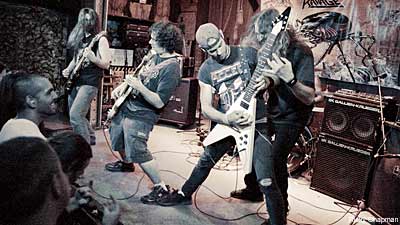 It seemed like the first cold night of the season in Worcester, Mass., at the CD release show for Ravage's 'The End of Tomorrow' on Sept. 6 -- but the thrash and power metal-laden lineup comfortably warmed up the upstairs of Ralph's Diner.

The leather-and-chains rock-metal of Amadis set an intense but lighthearted tone -- a tone that seems almost innocent when compared to the darkness of more modern heavy bands. Painted renderings and sculptures of James Dean, Einstein, and Jack Nicholson's Joker covered the walls, while the epidemic of band stickers that infect every rock club were quarantined respectfully to the metal poles and bathroom doors.

The spectacle of Armory's progressive power metal was matched by the humor of their impromptu stand-up routines in between songs. Vocalist Adam Kurland made Peter Rutcho's keyboard commit sonic flatulence before their first song, and later in the set he instigated a call-and-response with his powerful voice: a lost art in more trendy genres of metal.

Relapse Records' youthful Revocation was perhaps the most aggressive band on the bill. If it weren't for their disgustingly competent and technical death-thrash, I would be distracted by drawing invisible diagonal lines with me eyes, starting from the Municipal Waste logo on guitarist/vocalist David Davidson's shirt, down to bassist Anthony Buda's shoelaces (both glowed uniquely green in the heavily blacklighted stage).

The venue slowly packed in and burst at the seams when Ravage finally took the stage, visually supported by Repka's colorful album art on the backdrop. Vocalist Al Ravage gave heartfelt thank-yous before the sonic onslaught. A red sign behind the bar, proclaiming that it was "Time to F---," hung a scant few yards away from a ceramic of Jesus carrying the cross, which oversaw and blessed the night's proceedings.

Ravage tore through wonderfully riotous and thrashy tracks from the new album as well as old favorites -- 'Freedom Fighter', 'Damnation,' 'The Nightmare's Hold,' 'Grapes of Wrath' and even a Judas Priest cover. Before their final song, Al politely asked if we were ready for "one more thrashin' song," a question that was answered with shouts of affirmation and clapping. They then blasted into their namesake tune, but something tells me they would have played it no matter how we all answered.