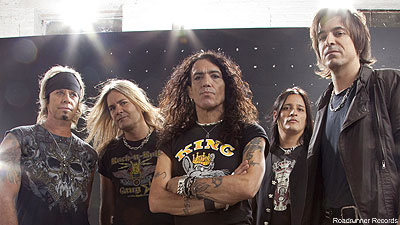 Sunset Strip kings Ratt are back with a new music video to support the lead single off their forthcoming album, 'Infestation,' due April 20 via Roadrunner. Today Noisecreep presents the world premiere of the 'Best of Me' video.

Given the band's history, it's pretty natural that the first frame of Ratt's new video begins with a shot of a Sunset Boulevard street sign. Those first few introductory seconds say everything about the history of Ratt. The sign also alerts the viewer that they're about to experience classic Ratt in all their glory: a live club show, women and that signature guitar tone.

"'Best Of Me' is the best Ratt video made in 20 years and it accurately reflects the new album's cover art and title: 'Infestation,'Ratt guitarist Warren DeMartini tells Noisecreep. "The video is a visual ode about today's 21st century mass media and information age overload mixed with unabridged smokin' live performance. We know Ratt fans will like it as much as we liked shooting it."


The video also points to a bigger issue here: younger kids on the outside looking in, trying to be a part of the Ratt pack, and the overarching idea that infectious hooks can permeate all aspects of daily life. There's also family cameos, proving that not all relationships suffer because of rock 'n' roll.

Andrew Bennett directed 'Best of Me.'

Think you can shred like DeMartini? Enter for your chance to win a signature Warren DeMartini guitar!