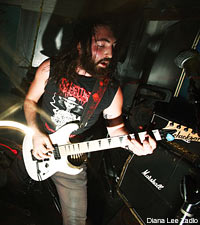 Back in the day, punks and metalheads were bitter enemies, a problem Billy Milano addressed in the immortal Stormtroopers of Death ode 'United Forces.'

He urged, "Skinheads and bangers and punks stand as one/Crossover to a final scene/United forces and their job won't be done/Until the world can see," and it seems that the latter generations listened, as now, you'll generally Mohawks and longhairs rocking out peacefully side-by-side.

There is, however, always the exception, as Boston bruisers Ramming Speed discovered at the Fish Flat this past Nov. 10th in Philadelphia.

Ramming Speed's balls-out amalgamation of thrash, grind, crust, hardcore and punk rock appeals to music fans from all across the metallic spectrum, but you'd have been hard-pressed to prove it at last night's show. A line of headbangers pressed up close and thrashed to their hearts' content as the rest of the crowd (predominantly punks/crusties) hung back, sipping forties and reluctantly nodding their heads. 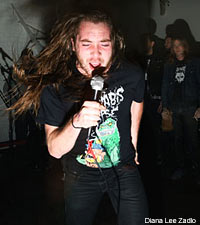 However, once female-fronted crust punx Detonate took the stage, the crowd surged forward, and kept the momentum going for the nameless d-beat band that closed out the show. The handful of heshers up front were clearly loving the bejeezus out of it. But as far as the Fish Flat's punk population was concerned, Ramming Speed's dueling riffs and high-octane performance fell flat. To add insult to injury, their set was cut short to a cramped 18 minutes or so -- not nearly enough time for those of us who'd come to thrash!

Ramming Speed are currently finishing up a nationwide tour with Cannabis Corpse supporting the Candlelight re-release of their debut 'Brainwreck,' and are finally shipping back to Boston. Make sure to catch them on this last leg of their tour in your local basement, warehouse or living room, and come ready to rage!