Album: Fall to the Rising Sun

RIYL: Rage Against the Machine, Disturbed, System of a Down

"There was a magazine article about the opium wars in Afghanistan... it was a heart-wrenching story and had these vivid photos of children crying as their family's livelihood, a poppy field, was slashed down by local security forces. This is where the title 'Slash & Burn' initially came from, before any of the song itself was written," says drummer Mike Russo. "I don't play my acoustic too often," explains guitarist Jon Russo. "But I was listening to 'Snuff' by Slipknot and the Johnny Cash rendition of 'Hurt'... it made me want to pick it up and that's when I wrote the intro/verse riff. I recorded it immediately, and the acoustic guitars heard on the song are from the original recording."

The powerful rhythm section quickly followed, and with the foundation laid singer Johan Maldonado did his thing and developed the overall concept and story further. "'Slash & Burn' is one of my favorite songs on the album; everything came together really fast... and those are usually the good ones," says Johan. "I wanted the song to capture the fog of war and the lives left in its wake... on both sides of the barrel." Many of the band's best friends and biggest supporters serve or have served in the U.S. Armed Forces, and to express a small token of gratitude to all the troops Psychothermia will be donating one copy of Fall To The Rising Sun to those deployed overseas for every copy sold.

Psychothermia will release the Slash & Burn album on Feb. 8. Pre-order the album for $9.99 directly from the band. 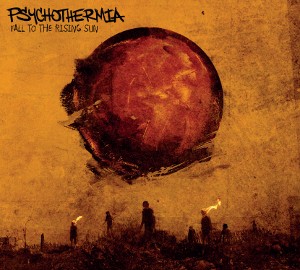 Filed Under: psychothermia
Categories: News
Comments
Leave A Comment
Back To Top