Stratovarius are about to release Nemesis, which is their 14th (!) album. Noisecreep recently spoke to vocalist Timo Kotipelto and keyboardist Jens Johansson after they noshed on a meal of Indian food while in NYC for press and promotion.

The Finnish group's power metal bellies were full and Kotipelto and Johansson were ready to discuss the new album and why we won't be seeing them tour American any time soon. Trust us -- it's not their fault!

How was the Indian food?

Jens: Good, but I am sweating like a pig.

Well, it won't be fun coming out the other end. So tell us, who is your biggest nemesis, if anyone?

Jens: Ourselves, yes. You are always your own worst enemy.

Pick one track from Nemesis and put us inside of it.

Jens: I only wrote two of the songs, but it's a lot less romantic than you would think, songwriting. It's five percent inspiration and 95% curry and perspiration!

Jens: Yes, it does.You collect impressions as you write songs and piece them into something that makes sense. All the stuff we've written has been approached from the point where we want to make the best record possible. There are never any good stories. We sit in front of the computer, trying to work out the song for hours and hours and hours. People who write books have the same problem. Ask Steven King. He spends eight months in front of a word processor. That's an internal thing.

Timo: I'll go with "Out of the Fog," which I composed the intro to, and had a story behind the song. I was at the lake and the temperature was dropping, and fog was rising from the lake. I had this idea, how would it be, if there were soldiers marching in the fog, what happens when you come out of the fog.

Listen to 'Unbreakable' from Nemesis

Do either of you have any non-metal or non-musical skills or hobbies?

Timo: I am boring but mine are related to sports. When I was younger, I did track and field stuff, but I started to judo and lately, it's more jogging and weightlifting.

Jens: I can fix electronics, I am into computer programming.

You have said that Nemesis is darker and more modern? What makes it so?

Timo: We didn't plan it before. The biggest difference is that this time, our guitarist [Matias Kupiainen] produced it and mixed everything by himself. On the last album, he mixed half. The guitar sound is heavier. But we have a new drummer behind the kit, which of course makes a difference. We didn't plan it, we never do.

Jens: Everyone was feeling darker, maybe. We had music written but didn't have lyrics. We don't have a grand plan.

You've been churning out power metal since 1984 - what keeps you fresh and not bored doing the same thing for nearly three decades? The infusion of new blood?

Jens: We have changed members a lot! The old ones quit and they disappeared. Then we get younger ones, who bring new influences. I was young once; now I am the oldest guy. In 50 years, we will have replaced everyone with our own clones and invade the moon, with rockets. A moon-invading rock band.

Timo: One guy who was a band leader quit, and he was composing all the songs. Now the situation changed, and we have five guys, so there is more creativity.

Jens: It's been one of the biggest changes in the 30 years, and I have been there for 18 years. Now we have five guys and more output and more stuff to choose from. If you rely on one guy, it is difficult to be fresh. We have a good cooperative spirit, though.

If Nemesis were a movie soundtrack, what would be the plot?

Timo: I would guess it would be science fiction, yeah. About an angel of revenge.

Jens: Someone invading the moon. What happens when they set off for the moon? The earth gets scorched.

What's the touring plan behind Nemesis?

Timo: We will be touring in Finland in March, then Russia and then basically, it'll be time for a European tour and then the plan is to go South America, for the summer festivals, and the autumn will bring Asia. It would be nice to play here. We only did two tours in the U.S., ever. We'll see.

That was my point – what's the plan for America? It appears you never perform here.

Jens: It's too expensive to get work permits for everyone. It is more expensive. The legal paperwork is a pain in the ass. It is government red tape, but they want to protect their markets from foreign labor. But I don't think we are competing. If fans want to see our band, they want to see our band. They put up some big barriers; we have to hire lawyers. The [work] petition was two years before. Now it's a stamp that lasts for two months. 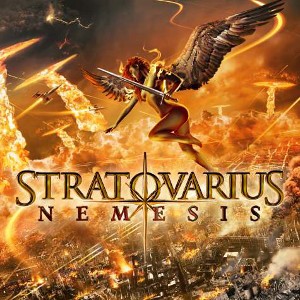 Nemesis is out on Feb. 26 via Armoury Records and can be pre-ordered on Amazon today.