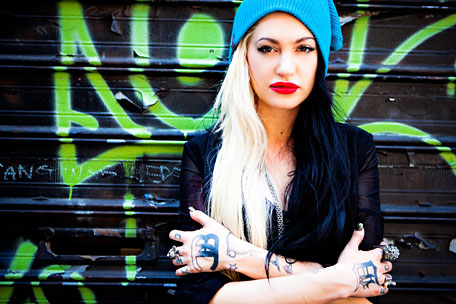 Porcelain Black is the self-proclaimed would be lovechild of Britney Spears and Marilyn Manson. Born Alaina Marie Beaton and raised in Detroit, the 23-year-old rocker on the rise left the hometown haters behind, and after a go at the music industry under the stage name Porcelain and the Tramps, was signed to famed producer RedOne's 2101 record label. Porcelain soon hooked up with rapper Lil Wayne, whose rhymes are featured on single 'This Is What Rock N Roll Looks Like,' and found herself on tour with the hip-hop star on his I Am Music and I Am Music II: I Am Still Music tours.

Black, whose RedOne-produced debut album is in the works, visited Noisecreep's New York office to talk about giving "birth to a panic attack" before her first TV performance on the 'Tonight Show With David Letterman,' to brush off the Lady Gaga comparisons and to give her expert opinion on what exactly rock 'n' roll looks like.

How did you come up with the concept for your 'This Is What Rock N Roll Looks Like' music video?

So it was kind of just like my revenge, and just a statement, like throwing it back in their face. 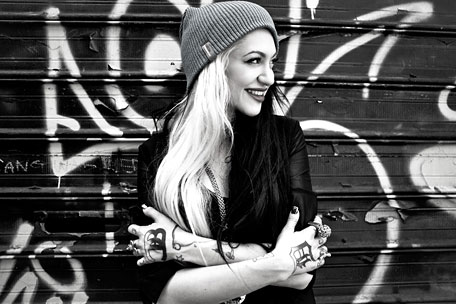 When did you move to Los Angeles?

I'm from Detroit and I got kicked out of two high schools in two months when I was 15. I was like, "I didn't quit, mom. I got kicked out. What do you want me to do?" [laughs]. I didn't go back and I just started traveling around with my friends, and went and lived in Ohio for a little bit, and just kind of did my own thing. Then I ended up in New York and ended up getting discovered by a manager and moved to LA right when I was 18.

How did you get hooked up with Lil Wayne and his management team?

RedOne introduced me to EI [Derrick "EI" Lawrence], who is Wayne's manager, and my manager now. So we have the same manager. I met Wayne in New York and we hit it off, and he wanted to be on the song ['This Is What Rock N Roll Looks Like'], and then that led to the video. Then that led to me being on the first part of the I Am Music tour, and now I'm going on the second part of the I'm Still Music tour.

How is it touring with Wayne?

A lot of fun. If we're in the same place at the same time we're definitely always hanging out. He's the homies [laughs].

I have dancers, I have a band. It's really a mix of rock n' roll and pop-dance performance. It's really like if you took Britney Spears and Marilyn Manson and mushed them together. 'Cause I'm dancing and going crazy, but then I'm crawling around and spitting on security guards, and walking around with bloody knees.

Do you have a pre-show ritual?

What's the story behind your stage name?

My favorite color is black and I have porcelain skin. My aunt used to buy me all these creepy porcelain dolls when I was little. And I had strawberry blond, curly hair and I was really pale, so she would always say, "Porcelain, Porcelain!" And it just kind of stuck.

How would you describe your style?

I mean, it's really all over the place. Sometimes I dress crazy and out of control, and sometimes I'm dressed casual. I like to mix low-end stuff with high-end. I love vintage stuff. And I live in LA, so you can find amazing vintage everywhere. 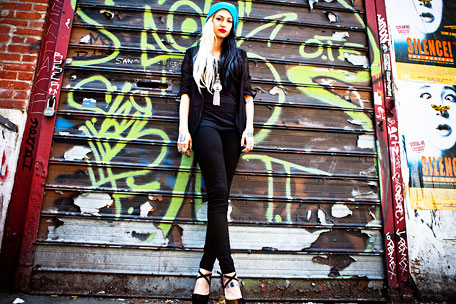 So, what does rock 'n' roll look like, according to you?

Whatever you want it to look like. There are so many types of rock 'n' roll, you can't say one thing, this is what rock 'n' roll looks like. Rock 'n' roll I think is about attitude and the way you carry yourself, and that's what it looks like. It's not necessarily what you're wearing.

What artists influenced you growing up?

So when did pop music start coming into play?

Well, I listened to a lot of Aaliyah and Britney [Spears] and I grew up in Detroit, so there was like R&B and rock and hip-hop everywhere. It's not like a really listened to one thing. Rock's clearly my favorite, but I'll listen to everything. I'll go and listen to Dolly Parton, and then Travis Porter 'Make It Rain' [laughs]. It's all over the place! You never know what's going to pop up on my iPod. 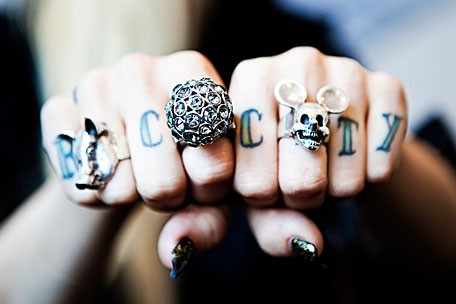 RedOne produced your album, and he has worked with a number of big name acts, but he's most often associated with Lady Gaga, because he produced a lot of her big hits. So, Lady Gaga comparisons are inevitable, and they've already started. How do you feel about that?

I don't really care, because people don't know me that well yet. So it's just straight judgment without really any research and they don't know what they're talking about. And at the end of the day we're two completely different people. They can think what they want, but in time they're going to see this is a rock 'n' roll thing, and I'm my own person. They can think what they want. And, it's not bad to be compared to somebody like that, because she's successful.

How was it performing on 'The Late Show With David Letterman?'

Do you usually get that nervous before a show?

That was definitely the most stressed out I've ever been in my entire life. But, it's normal to get nervous before you get on stage. I feel like if you're not nervous, then there's something wrong, because nervousness just comes from wanting to do a really good job. And if you're not nervous you don't care. That's what I think. Or, you're just not human. Or, you're wasted! [laughs].