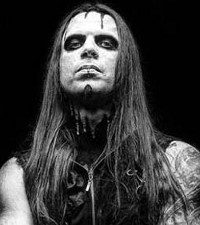 UPDATE (4/13/12 5 PM): According to Hate's official Facebook page, Slawomir 'Mortifer' Archangielskij's autopsy report determined that he died of heart rhythm disturbances (Herzrythmusstörung). The group wrote, "It is also known that Slawek suffered from asthma and had problems with breathing whilst asleep (obstructive sleep apnea). His family would like to thank everybody who helps and supports them in this tragic moment with the following words: We would like to thank for sympathy, love and any kind of support that we have been given by SÅ‚awek's friends from the bands Hate, Naumachia and Saltus. We also would like to thank the band Hypocrisy for their attitude and support which is very much appreciated. Great thanks to all kind people in Poland and all over the world whose moving goodwill helps us so much in this hard moment."

Hate, a Polish death metal band, is mourning the sudden death of their bassist.

The group released the following statement on their Facebook page, "[During the] night [of] April 5-6 near the German town of Munchberg, our friend, best comrade and longtime bass player unexpectedly passed away. After the show in Stuttgart last night, he went to sleep and never woke up. We found him lifeless early in the morning and immediately called an ambulance. He was reanimated, but to no avail. Results of Slawek's (Slawomir 'Mortifer' Archangielskij) autopsy should be known soon. In this situation, we decided to cancel the remaining shows and return home. We gave detailed testimonies to the German police. We are shocked and shattered by his sudden, unexpected death. We mourn together with Slawek's family and friends."

Archangielskij reportedly joined the group in 2007 and appeared on 2010's Erebos and 2013's Solarflesh album, which they were currently promoting on their tour. They're signed to Napalm Records. Archangielskij was also the bass player for Naumachia and the guitarist for Saltus.