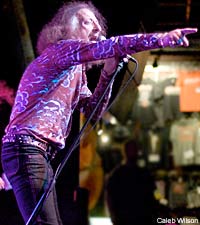 "Welcome to the black T-shirt festival," Aaron Deal, the drummer of Salome very fittingly laughed out to the crowd after the band's first song. Throw in wizard beards and pot tits on guys, and you have defined the crowd of Planet Caravan Festival in an accurate, yet wonderful way. By day two, it seemed most festival-goers' energy had either been sucked dry from the night before, stuck in the headache of a hangover or being stored up for the reason most took the curved back road trek out to Asheville, N.C. -- Pentagram and Yob.

The once-instrumental Batillus opened up the second stage, hosted at the bar Mo Daddy's, with their New York-forged blackened doom, which now features the vocals and electronic accompaniment of Fade Kainer. Normally content to hide behind his keyboards and forest of hair, Kainer was transformed into a rage over the lights not getting turned off for their set. This anger transferred to the rest of the band, creating easily one of the most hateful and engaging performances of the weekend.

Most people have never seen Yob because of the whole break up, get back together and not live the selfish and selfless touring life style thing. Using borrowed amps, Yob had a static and not-quite-loud-enough-yet like start on 'Quantum Mystic' that soon faded. After the slumming end to 'Ball of Molten Lead,' Mike Scheidt folded his hands and bowed to the crowd; mutual respect, mutual bliss. If at any point during the night one met and spoke with Schmidt he displayed that same adoration and gave joyful hugs to all fans. 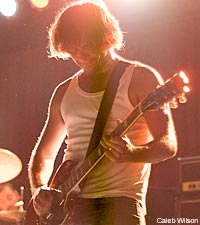 Following Yob is not easy. A crowd is left stunned, laying down but still standing, from the long slow roar. Getting energy out of them is a feat. But not for Orange Goblin. Coming from England for just this show, no member of the band was going to accept a crowd of arms crossed and chin bobs of approval. It was time for violence if need be. Almost at war with the crowd, vocalist Ben Ward shoved his face in the crowd, taunting them; pointing directly at people to move up, get close and smack each other around. Every crowd is a rag doll for the fine gentleman of Orange Goblin.

At Mo Daddys, a different kind of energy -- a different kind of attitude -- came forth. It was the slow and cathartic sound of Hull. Since the release of the debut full-length 'Sole Lord' in May, Hull have been collecting praise, and deservedly so. With three guitars and every member, barring drummer Jeff Stieber, teaming up on warring, dissonant vocals, there is no way not to be stunned by Hull.

With a main event like a Pentagram show, questions come up. Does vocalist and founder Bobby Liebling live up to the hype? The legend? The myth? Yes, but the age of a person will dictate what that 'yes' means. To the younger fans, watching Liebling was like seeing a cartoon character prance around the stage with a billboard smile and bouncing eyes. To the older fans, the stage antics are part what makes the show great.

The current Pentgram lineup is something to see, as most bands clocking in their 40-year anniversary sound muted and watered down compared to what they were in their prime. With drummer Gary Isom holding a huge fort, the rest of the band had to keep up and keep the band striking high and fast at all times. With Pentagram's past and each lineup being something all their own, the sound of this incarnation is called 'Last Rites,' after the band's forthcoming album, should be expected to put out a memorable record. When asked why this record keeps getting delayed, Liebling exclaimed to Noisecreep, "We're just too busy to record." After the band's fall tour of Europe and early U.S. jaunt, Liebling expects the band to finally hit the studio.

At 1 AM, with the Planet Caravan Festival technically laid to rest, US Christmas had just gotten their start. Always an oddity and perpetually unpredictable, this band from the mountains of North Carolina was welcomed by fans sitting at the bar yelling out "You guys are f---ing weird!" People screamed out, and people laughed after the comment, while guitarist Nate Hall began the opening melodies that were chased by a violin. The fan's scream was praise and celebrating of a night that was far from over.