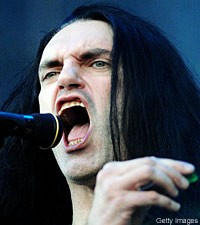 Word spread just before midnight last night, and now, it has been confirmed. Peter Steele, the bassist and frontman for Brooklyn heavy metallers Type O Negative who also spent time in Carnivore and Fallout, passed away Wednesday at the age of 48. An official cause of death has not yet been released.

Type O Negative manager Mike Renault confirmed the initial reports, saying in a statement, "Peter passed away last night. As of now it appears to have been heart failure. That's all the details we have right now."

"Hatebreed would like to extend our condolences to the family, friends and fans of Peter Steele," Hatebreed says in a statement. "He is one of the best guys we've ever toured with and a true legend! There will never be anyone else like him. May he rest in peace."

Biohazard's Evan Seinfeld writes on his site that Steele was "my single biggest musical influence ... who named Biohazard ... I f---ing miss you so much already ... I love you brother, I hope you are in a better place."

Dan Lorenzo of Hades explained that "all of us band guys think we write great songs, but when I listen to Type O, I know that they, and Pete in particular, wrote a bunch of songs that were on another level from the rest of us mortals musically. I don't use the words 'musical genius' together often, but in Pete's case it fits. And it's true. Today is a very sad day for me."

Icarus Witch bassist Jason Myers calls Steele "a true icon, enigma, musical genius and hell of a nice man who I had the pleasure of talking with on several occasions dating back to the early '90s. His work with Type O Negative was groundbreaking and a large influence on myself and other members of Icarus Witch."