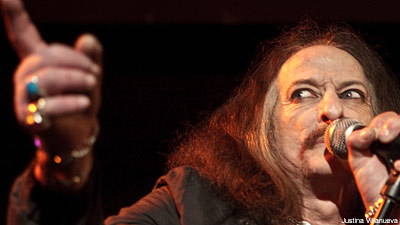 On Jan. 17 at BB Kings, there were only a couple tables being occupied -- but the dance floor was still packed. Who wants to sit down to watch doom metal legends Pentagram anyway? Girls at least half the age of frontman and founding member Bobby Liebling chanted his name in between songs. What's that tell you? Dude's still got it!

"As you walk through life, and you f--- up, sometimes you got to 'Pay For All Your Sins,'" announced Liebling. He was in full form, dancing and air-guitaring the whole set. "I can't keep my f---ing pants on. Maybe I should just take them off!" Anything Liebling said garnered applause and cheers.

"Ain't no place like the Apple," Liebling said after telling the audience that he's originally from Brooklyn. Considering that the doom pioneer has traveled the world, that's a pretty bold statement. "I love you all," he added before playing a new song called 'South of the Swamp.'

Like show openers Gates of Slumber, the show was also Pentagram's second time playing New York City within a year. When they played Webster Hall on March 6, their performance was filmed for a documentary titled 'Last Rites: The Fall and Rise of Bobby Liebling.' The show was such a success that it sparked a set of tour dates around the country. The documentary is slated for release in late 2010.