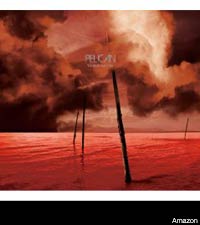 Crafting and perfecting the instrumental music genre and ambience that audiences recognize them for, Chicago's Pelican are both out on the road and out with a new album this week, thanks to new label home Southern Lord Records.

Unable to be pigeonholed by the variety of their musical influences as well as the lack of a vocalist, the new album keeps a heavy focus on its sound and taking a light hearted approach on such tracks as 'Glimmer' and then sludging it up and tuning low on others such as 'The Creeper' this album is yet another success and if you need a soundtrack to your days, start it off with this album.

As previously stated the band is currently on the road for the month of October for a headlining tour along with labelmates in Black Cobra, as well as Minsk and Sweet Cobra picking up on select dates. Additionally, while on the road in support of the new release, the Chicago area paid homage to the quartet as the legendary burger house meets metal haven Kuma's unveiled a new entree to their roster, titled the Pelican Burger. Described as a 10-ounce Kobe beef patty with pan seared scallops and lardons, in a garlic white wine sauce on top of a parmesan crisp, you can satisfy both your ears and your stomach with all things Pelican.