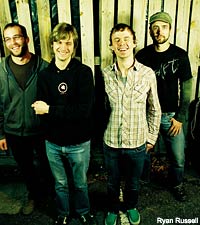 In support of their upcoming album, 'What We All Come To Need,' Chicago instrumental masters Pelican have announced a massive 28-city North American trek set to roll out this October.

Starting in Minneapolis and ending in their hometown, Pelican's main support includes labelmates Black Cobra on most dates, with Minsk and Sweet Cobra among the variety of bands joining them along the way otherwise.

But before their headlining tour commences, Pelican will be part of an incredible Southern Lord Showcase for the Blackened Music Series' next installment on Sept. 22nd at the Brooklyn Masonic Temple alongside Sunn O))), Earth and Eagle Twin.

Their fourth studio album, 'What We All Come to Need,' will hit streets on Oct. 27 from Southern Lord.