Kurt Brecht's voice is thrash. As the vocalist for the highly influential D.R.I., the Texas native helped define the crossover (hardcore punk meets metal) scene of the '80s, leading the way for later groups like Crumbsuckers, Leeway and Municipal Waste.

Although he's still going strong with D.R.I., Brecht has also teamed up with members of ahead-of-their-time metallers Dead Horse as Pasadena Napalm Division.

On May 28, Pasadena Napalm Division will bring their trend-free take on thrash metal to the masses when their self-titled debut album hits stores.

Noisecreep is proud to bring you the exclusive premiere of "100 Beers With a Zombie," the first track off the forthcoming album. 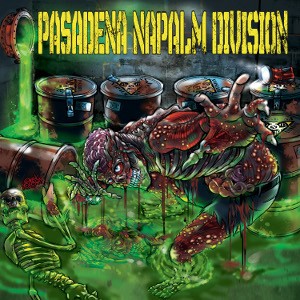 "Fans of D.R.I. and Dead Horse will rejoice. PND is what thrash metal should sound like in 2013," says Brecht. The 13-song self-titled release was recorded at the Music Lab in Austin and features guest vocals from Tony Foresta (Municipal Waste) and Argo (Dead Horse).

Pasadena Napalm Division hits stores on May 28 via Minus Head Records.