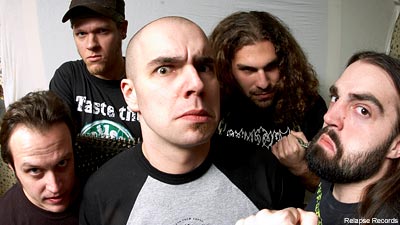 Following a collection of tour dates that span the next five months, Rumpelstiltskin Grinder will join Deceased on a West Coast tour in August. Including several dates in California, Arizona and a handful of other states, it'll be Deceased's first time in some of these cities in 25 years.

Since the release of the record 'Living for Death, Destroying the Rest' on Relapse, Rumplestiltskin Grinder have been garnering favorable attention from various outlets. The Philadelphia Weekly, which comes from their hometown, says that "the end of the world finally gets its soundtrack" and Metal Hammer finds the album's crossover appeal to be one of its most enticing aspects.

For the next few weeks, Grinder will be hitting up a variety of East coast cities, playing one-off shows with D.R.I., Obituary and Naglfar. Touring to support their latest record, the members of Rumplestiltskin Grinder have recently made a video for 'Nothing Defeats the Skull' as well.