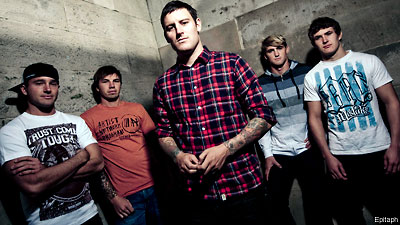 For their new album 'Deep Blue,' Aussie metalcorists Parkway Drive trekked across the International Date Line to Los Angeles to record. "Recording 'Deep Blue' was amazing," vocalist Winston McCall told Noisecreep. "To be honest, it was the first time I actually felt like a musician [laughs.] We worked for four weeks with Joe Barresi, and he worked us to the bone. It was great. It seemed less tiring and draining, and more inspiring. He gave us such a large hand in what the record would sound and feel like that it was up to us to step up and make it happen so it was a pretty intense process."

Working with Baresi was so satisfying that the band woke up eager to get to work. McCall said, "You'd go to sleep at night in anticipation on the next day's work. Being responsible for creating all the sound on the record as opposed to leaving it up to a computer gave us a new drive we had never had before. The were no bad parts to the process. It was all fun. The fart mic was ugly."

Fart mics aside, 'Deep Blue' represents some newness to the Parkway Drive sound, which, in case you are uninitiated, is like being smashed in the face repeatedly with a spiked ball. "The production is completely different," McCall said. "We tried to aim for a more organic sound on this record than we had in the past and rely more upon the feel of the music and how we played instead of clinical edits and digital corrections. Music-wise, there are a few new elements we brought in this time around, but I guess you'll have to hear it to pick those up. We tried to focus more on progressing the way we write more so than anything else. We tried to write an album that worked as a whole and had a flow and continuity throughout."

Parkway Drive approach their music in a straightforwardly honest way, with McCall saying, "We're not re-inventing the wheel, but we we're never inventors in the first place. This record represents us at this point in time. We write what we write because we have fun doing it and like expressing ourselves in this way."

Given the meteoric rise of metalcore in the '00s, Parkway Drive aren't pledging much allegiance to that scene or sound, since it has morphed so much. "To be honest, it seems as though metalcore is pretty much dead, at least the metalcore that used to be around," mused McCall. "When the whole boom happened, there was still at least a slither of a link to the hardcore community and ethic that could represent the 'core' part of the name, but these days it's pretty much gone with a few exceptions. You have a bunch of bands influenced by bands that started six months ago, with no history or knowledge of the musical styles they are imitating, playing bad metal and from time to time dabbling in bad dance music.

"As far as I'm concerned, I have no interest or association with this stuff. If people think we sound like the music being played today, and that it is classed as 'metalcore,' cool, I don't mind. I just know that there is and always will be something more to this music and life than is being put out there by most heavier bands today. Playing open chugs doesn't equate to hardcore. Triggering your drums and squealing like a pig doesn't mean you're metal."

They band will play Warped Tour in support of 'Deep Blue.'