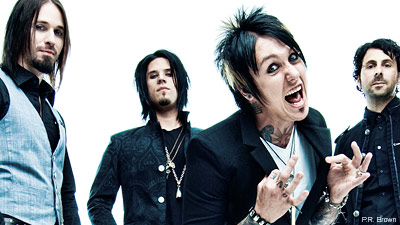 A new Papa Roach video, 'Kicked in the Teeth,' is available from the band's latest album 'Time for Annihilation ... on the Road and on the Record' (out Aug. 31). The clip was directed by Shane Drake and features vocalist Jacoby Shaddix getting repeatedly assaulted as he walks down the street between shots of the band playing. One guy punches him in the face, another throws rocks at him, a third smacks him with a baseball bat and the last dude his him with his car. After each attack, Shaddix gets back up, smiles and walks on.

Each of the by attackers in the video are wearing a black T-shirts marked with the letter 'I,' a not-so-subtle metaphor, perhaps, for the way the band feels it was treated by its former label, Interscope. Papa Roach are now on Eleven Seven Music.

"We wanted to work with a team who's focused on rock music rather than pop and urban," Shaddix said in a recent interview. "Moving to a successful indie like Eleven Seven Music gives us that without sacrificing the manpower of a major."

'Time for Annihilation ... on the Road and off the Record' features nine live cuts and five new studio tracks, including 'Kicked in the Teeth.' "Everybody keeps going, 'Man, you guys, you know, you guys kill it live, you guys are a great live band.' And we were like, 'You know what, it's time for us to do a live record,'" he said. "And so, we wrapped up 2009, we were doing dates with Shinedown, and we started recording shows towards the end of that. We got nine live songs, and then we have five studio songs, and so it's kind of like the best of both worlds."