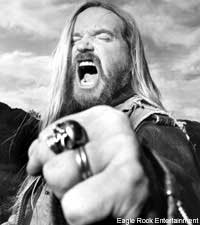 Zakk Wylde, Ozzy Osbourne's longtime guitarist both on stage and in the studio, has finally spoken out about that lingering question that no one seems to want to officially answer: Is he in, or is he out as the self-proclaimed Prince of Darkness' right-hand man? Unfortunately, Wylde's take doesn't make things any clearer.

See, a few weeks back, Ozzy informed Classic Rock magazine that he and Zakk had parted ways, and that he was actively seeking a new guitarist because he felt his solo stuff was starting to sound too much like Zakk's own work with Black Label Society. Ozzy casually mentioned that he'd be interested in auditioning Rob Zombie's John 5 for the opening, and even said he'd be auditioning some unknown guitarist who was flying in from, of all places, Greece.

Zakk, it seems, didn't get the memo. On his Twitter, he wrote that he was "doing BlizzCon with [Ozzy] in August and supposed to finish up the [new Ozzy] CD in September...This is news to me. I haven't heard anything about this. Until I talk to the Boss, I don't know. I love Ozzy." The next day, Wylde's wife took to her Twitter account, to reassure everyone that things would be fine between her hubby and Ozzy. Now, Zakk has spoken out in a recent interview about the situation.

"Everything's cool, man," Zakk says. "I mean, Ozzy's always jammed with other people...since we did 'Down To Earth' and all that other stuff. So it's no big deal. If Ozzy's gonna play with someone else, what am I gonna do anyways?"

Wylde skirts the issue further, adding, "At the end of the day, when we did the 'Down To Earth' record, Oz had other people coming in and writing with him. [I was like], 'Boss, knock yourself out,' you know what I mean?! What we're supposed to do is, there's this [appearance on August 20] down in Anaheim [at the BlizzCon convention] and then after that, we're supposed to finish the [new Ozzy] record up in September or something like that. We did 16 or 18 songs or something like that, so we'll write some more, finish the record, and then we're supposed to do like a year[-long] world tour."

In the Classic Rock interview, Ozzy did acknowledge Zakk's contributions to his upcoming album with producer Kevin Churko. "Zakk came down and did a bunch of stuff and I don't know if I want to use it but I've got it there if I do," Ozzy explained.