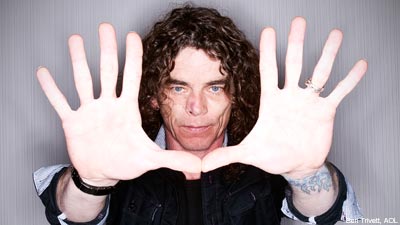 Last year, New Jersey thrash band Overkill launched the Killfest tour in Europe with Exodus, Gamma Bomb and Torture Squad. Now they're taking the slaughter through North America with Vader, God Dethroned, Warbringer, Evile and Woe of Tyrants. The tour launches April 1 in Philadelphia and runs through May 1 in New York City.

"We talked to Vader a while ago about touring with them," Overkill frontman Bobby 'Blitz' Ellsworth told Noisecreep. "I loved the new Vader record ['Necropolis']. We already toured with Warbringer, done some festival shows with Evile, so I know all these guys personally. So in our opinion, this is kind of a good mix of having the old and the new. Having us being the old and Warbringer being the new and the others in between. So I think it's really a good presentation of where the scene is today with regard to how long it's lasted and how fresh it is with some of the newer bands."

Ellsworth is especially excited to hang out with the British lads in Evile, a band that was directly influenced by Overkill. "I met them once at a show in the Czech Republic," says the singer. "We were both on a bill with Megadeth. Before the show, a few of the Evile guys stopped over and actually said that they were huge fans of the band. And later, when we were getting ready to play, I heard them in the dressing room and playing one of the riffs off of [our 1991 album] 'Horrorscope.' I think that's actually kinda cool that in this whole new generation [there are guys that] know their influences and know where they come from."