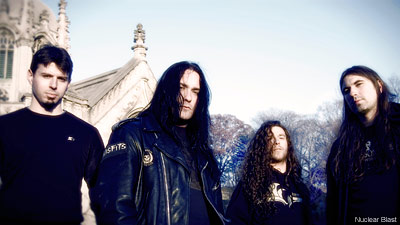 OFF THE BILL: In recent news reports, Nuclear Blast's Arsis have pulled off of the upcoming North American Carcass tour. Drummer David Kinkade states on the band's blog, "I do not feel that it is my place to go into specific reasons and/or details leading up to this decision, but being the drummer of ARSIS, it is in my best interest to NOT keep the fans in the dark. There are major personal and communication issues in this band that need be resolved before anything can continue as ARSIS. I will leave it at that. Again, my apologies to the fans, the other bands on the bill and everyone who worked so hard to put this together." Ouch.

A GOOD CONTAMINATION: Announced this past weekend was Relapse Records' Contamination Tour. This year's lineup includes Obscura, Graves Of Valor, and Anysmal Dawn. The tour kicks off April 14th in Birmingham, AL and runs until mid-May.

WARS AND RUMORS OF TOURS: Solid State's The Chariot have recently posted additional tour dates for their upcoming U.S. run this April. No details have been released on supporting bands joining the bill.

Filed Under: 658272, Arsis, Obscura, The Chariot, TheChariot
Categories: Tours
Comments
Leave A Comment
Back To Top